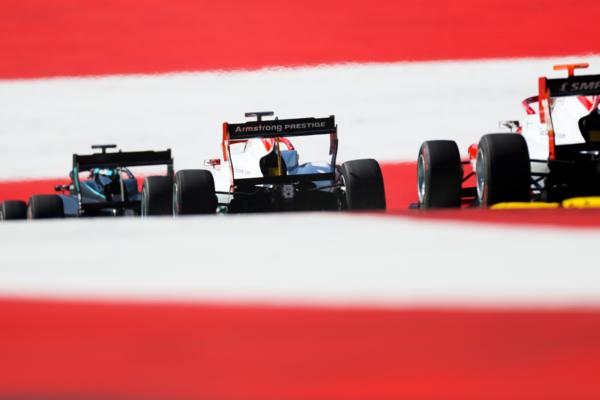 Knocked out while leading

Kiwi racer Marcus Armstrong leaves Austria with his first podium finish of the year and a strong tally of points that keep him at the sharp end of the 2019 FIA Formula 3 Championship.

It was not easy.

He took third place in the weekend’s opening race on Saturday having been fastest in free practice and taken pole in qualifying.

Then in Sunday’s partial reverse grid race he started from P6 on the third row of the grid. In classic Armstrong charge, he carved through the field to be third then chase down his team-mate, race leader Robert Shwartzman.
“We got a good start and a good first lap, I got Jehan in the first corner and then almost the lead already in turn 4. Not bad! From there it was quite a good race,” he said. Then in the closing laps the two Campos Racing cars of Sebastian Fernandez and Alexander Peroni collided, instigating a ‘virtual’ safety car period which in turn

set up a two-lap shootout for the win. Coming out of the safety car period and with his car’s DRS aero advantage enabled, Armstrong hunted down Shwartzman in that last lap and used his extra speed to overtake his team-mate cleanly, only for the two cars to come together. Shwartzman’s front wing hit and sliced into Armstrong’s right rear tyre, both cars leaving the track and allowing Jake Hughes and Jehan Daruvala through.
“I pushed like hell and I was lucky to get the VSC to let the tires cool down every so often. It was a very good race apart from some strategic misjudgments from me which I’m disappointed about. Then on the last lap, I didn’t do anything unusual, so we need to see what happened there.”

Shwartzman was penalised five seconds, dropping him off the race podium, but Armstrong’s flat tyre had shoved him well down the finish order.

With reverse grid races offering less points than qualifying-grid races Armstrong remains close to his team-mates Shwartzman and Daruvala and retains fourth on the points table. The next round is at the British Grand Prix, 13 and 14 July.