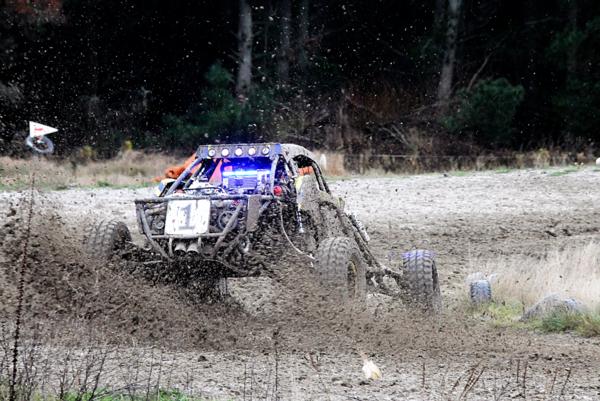 OFFROAD RACERS HAVE LEADER IN THEIR SIGHTS THIS WEEKEND

Albany (Auckland) driver Mike Fraser has his work cut out for him this weekend as the 2019 New Zealand Offroad Racing Championship thunders into the Spooner Range Forest southwest of Nelson.

Fraser cleaned up last month in the opening southern round of the championship, opening an early points lead in the seven-round series. The recipe for success in the unlimited class now starts with a massive and durable race-tuned V8 engine – usually a Chevrolet – driving through a purpose-built race transmission to the rear wheels. The Fraser car – appropriately backed by automotive cleaning brand Motomuck – is a single-seater built in the USA, modified for local conditions and fitted with a four-cam Toyota V8 engine.

Ranged against Fraser are some of the best unlimited class racers in the country Greg Winn, Jacob Brownlees and two relative newcomers to the sport, Dan Fisher and Alex Bright. These four along with 4WD Bits class 8 racer Cam Stratford in his Ford Ranger make up a Nelson-based V8 ‘army’ preparing to deny Fraser further time at the top.

Fisher and Bright are also separately registered as a team for the championship.

The event currently has 39 entries, 30 per cent of them raiders from the North Island, and the likely total entry on Saturday could reach 45. This is the first year that race teams have been able to enter all six regional rounds to build a points tally to carry into the finals.

Race organiser Darrin Thomasen says the 20 km lap will have ‘something for everyone’ including an opening six km of logging highway that will enable the fastest cars to rise safely through the field, and a downhill ‘firebreak’ return road that some braver racers are saying will be run in third gear. The course has been designed to work around logging activity in the forest.

“We have completed our final full-track check and I can guarantee the course will challenge everyone. There are a handful of creek crossings which could be pretty full after the weekend as rainfall works its way down off the hills. There are bumpy log ‘skids’ to go through and more water crossings before the course lands back at the pits – and that’s one lap of 12!”

Racing starts at Spooners Forest Saturday July 13 with the Kiwitruck youth category at 10 am, followed by the main event at 11.30. Spectator admission is free.