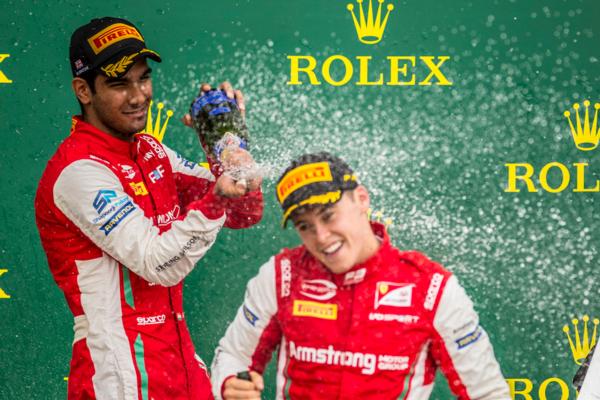 Marcus Armstrong recovered from a slow start in the opening Silverstone race of the 2019 FIA Formula 3 Championship to finish third and maintain his title contention.

Though pleased to have stayed at the ‘sharp’ end of the race, the Kiwi teen was unhappy with his start.

"As a whole, it was a bit of a disappointing race. The start was strange. I had a bad launch and then everyone was passing me which I wasn't worried [about] at the time. I got past Lungaard quite early in the race it was quite clear that the car was good and the pace strong,” he said.

Though Vips made a solid getaway he was instantly under pressure from Daruvala and forced to defend his lead. A virtual safety car bunched the field on lap seven, enabling Armstrong to slice back through to third.

“There was a Virtual Safety Car [VSC] straight after that, just as I was starting to get on the back of the leaders. The two VSC periods and the safety car weren't ideal for me, hampering the momentum that I had. In addition, it is difficult to overtake once you arrive at the front two as they weren't making mistakes so it was never going to be easy..."

At race end, Armstrong shadowed his team-mate, Jehan Daruvala, across the line, the pair taking P3 and P2 respectively behind Red Bull driver Juri Vips who won from pole position.

Daruvala held on for second place, .5 seconds ahead of Armstrong. The Indian driver now leads the championship by two points, while Armstrong posted the fastest lap time of the Prema drivers, a 1:43.998.