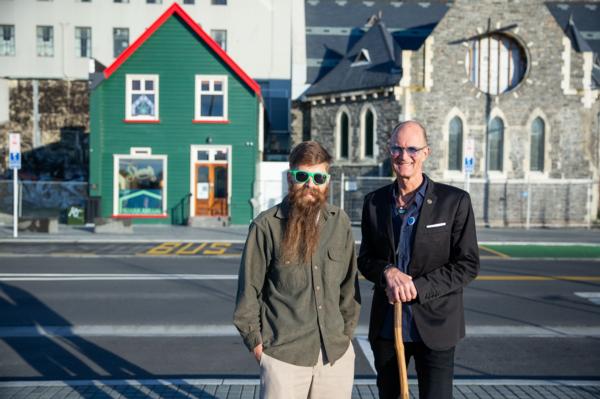 New Zealand's First Cannabis Institute To Be Established in Christchurch

Whakamana: the New Zealand Institute of Cannabis Education, Research, and Development, will be based in Shands Emporium, the oldest commercial wooden building in Christchurch, and the historic Trinity Church. The buildings sit side by side on the corner of Worcester and Manchester Streets and have been restored by the Christchurch Historic Trust.

Whakamana will incorporate an interactive world class cannabis museum and education centre, a hemp food cafe and restaurant, an alcohol-free plant-medicine shot bar, a hemp emporium, and subject to the outcome of the 2020 cannabis referendum, a cannabis dispensary.

The facilities will be built once a $1 million PledgeMe crowd funding campaign has been completed. Michael Mayell is excited by the venture and says, “this will be a facility that Christchurch will be proud of, an avant-garde attraction for locals and tourists alike - cannabis tourism is on the rise”.

Abe Gray, who originally established the Whakamana Cannabis Museum in Dunedin has   no doubt the Christchurch venture will be a success. “The demand for cannabis education experiences is exploding globally as this industry expands exponentially and New Zealand  is no exception,” says Gray.

Whakamana will also establish a Cannabis Education Centre of Excellence. This will provide the public with freely available, educational, fun experiences about Cannabis ‘plant –power’, and the medical profession with cutting edge research and accredited courses to advance their knowledge in the use of cannabis in medicines. As well as pioneering new uses for Cannabis as a viable, sustainable food and fibre source.

Abe Gray says the education that will be provided is critical to New Zealand.

“Cannabis is widely misunderstood in New Zealand. People forget that it has been used  in some cultures for thousands of years. It used to be the number one industrial crop globally and was legal in this country less than a hundred years ago.”

Whakamana will be established in two stages.

Stage Two will commence once the money has been raised, allowing the finishing of the Trinity Church reinstatement, and opening of the hemp food cafe and restaurant, alcohol- free plant-medicine shot bar, and hemp emporium.

Whakamana’s social purpose is to improve lives and restore the planet through plant power, and the organisation’s vision is to be the trusted source of cannabis education, research and development, to further our purpose.

“Hemp (low THC cannabis) really matters for New Zealand,” says Michael Mayell, who is advocating for a shift from Cows to Cannabis for Drinkable Rivers, and is on a personal mission to enable every Kiwi to eat 3 tablespoons of hemp seeds a day for the health of our bodies, the environment, and the economy.

Michael and Abe both expressed ‘immense gratitude’ to the Trustees of the Christchurch Historic Trust for the wonderful job they have done restoring these two Christchurch landmarks. “Shands Emporium and Trinity Church’s history will be acknowledged and their new life as an Institute dedicated to Earth’s most versatile vegetable was a fitting  next chapter for these 150 year old icons” they said.

Abe and Michael, who met at the inaugural iHemp Summit in Wellington last year, will be based in Shand’s for the next five months and will be hosting crowd funding information   and cannabis educational evenings with a different focus each night.

The first night will be Hemp Food on Monday 19th August from 6-9pm.

The following can be attributed to Dr Anna Crighton, Chair, Christchurch Heritage Trust:

Shand’s started life in 1860 on land owned by John Shand. The building housed professional offices until its conversion to shops in 1977 when it was named Shand’s Emporium. It is now the oldest commercial building left in the Christchurch central business district. Over the decades since 1977 Shand’s has been occupied by a Vintage Clothing shop, watchmaker and jeweller, second hand books and other bric a brac retailers.

Repurposed again since its move from 88 Hereford Street the Trust is delighted for Shand’s to take on a new exciting role in the central city, that of a Museum.

Abe Gray is a Botanist and Science Communicator with 20 years of experience in the Cannabis Industry. Originally from Minnesota, USA, he has lived most of his adult life in New Zealand where he gained his Bachelor’s and Master’s of Science degrees in Botany at the University of Otago

in Dunedin. He combined his 20 years of experience as a cannabis legalisation activist with his 15 years of experience as a tutor and guest lecturer in Biology to found New Zealand’s first interactive cannabis educational experience, the Whakamana Cannabis Museum, in 2013. He is also the primary caregiver to his two children while his wife works as a surgeon. Abe lives in Christchurch and enjoys tramping, bike riding and bird-watching in his spare time.