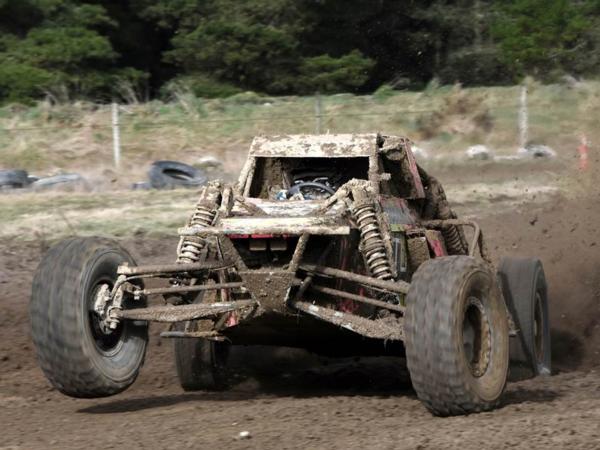 The event, held in miserable weather on Saturday at Canterbury Offroad Racing Club's CanAm raceway at West Melton near Christchurch, attracted more than 30 entries, with five-strong grids in the unlimited race car and unlimited trucks/4WDs.

Owen Chang is a former national champion and was making his short course championship debut in the turbocharged Jimco V6 racer raced in recent years by Daniel Powell.

Mark Brown brought his lighter four cylinder car out for its first run in the class and led the opening laps of his first heat, but his challenge faded early. Across the rest of the heats the battle was between Chang and the big V8 Aceco of another Christchurch racer, Jacob Brownlees. The latter's big two seater used its massive torque and power to match the slightly lighter V6 engined Jimco of Chang off the start line and on the longer straights but Chang had the advantage out of the tighter corners, turning on a masterful display for the crowd.

In the 4WD Bits class 8 unlimited trucks a field of five was whittled down to two after the first heat, allowing Owen Chang's dad and multiple class 8 champion Bryan Chang to focus on keeping his four cylinder turbo Chev ute ahead of the V8 ProLite of North Islander Craig Carlyle. Chang senior had opted for aggressive Komodo ‘extreme’ offroad tyres to cut through the ankle-deep mud of the early heats.

Chang's truck is well set up for the West Melton track, but in one later heat Carlyle was able to get past the Christchurch racer. The two remained locked in battle, shedding body panels from their trucks in the process, but in a similar manner to the class one battle Chang’s Chev had a visible advantage in grip off the start line and out of corners. At the end of the heats the outright title was decided over short one lap sprints, one car at a time. Owen Chang emerged the winner, Bryan second overall. Leigh Bishop was third in his Yamaha UTV, also winning the JG Civil U class for stock UTVs in the process.

Bryan Chang said the muddy conditions had caused worries for a few competitors, but the Giti Tires Chev never faltered.

“We’re constantly working on the truck’s handling, grip and flight characteristics and it performed superbly in the absolute worst conditions. Couple that with Owen’s class win and the title itself and it’s been a great family day out in the rain!”