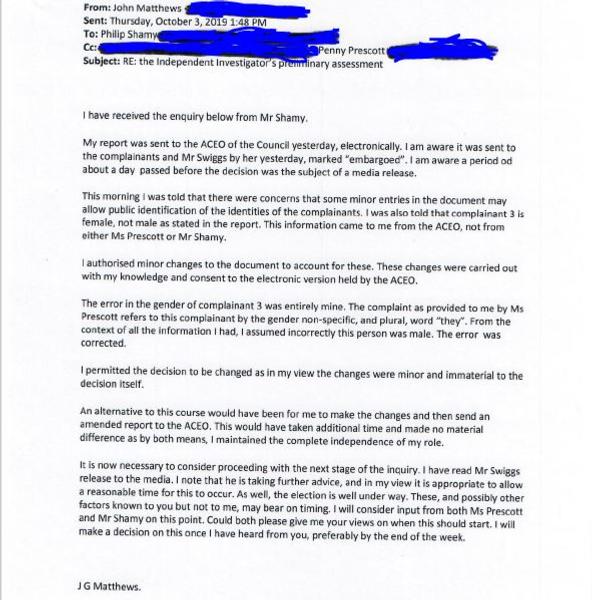 Response From Deon Swiggs To Media Release From 'Josh'

Deon Swiggs welcomes the call, from one of the complainants ‘Josh’, to particpate in the Code of Conduct process (if that is in fact available) investigating allegations against the former Christchurch City Councillor.

Swiggs is currently awaiting a decision on whether the Council will proceed with the investigation, since he lost the weekend’s the election.

The complainant, who was interviewed by Radio New Zealand under the pseudonym ‘Josh’, has today issued a media release (via Penny Prescott at the Canterbury Youth Workers’ Collective), calling for the Code of Conduct investigation to continue. His complaint is one of the two that independent investigator, John Matthews, ruled required further investigation.

Deon Swiggs says he would continue to fully and respectfully co-operate with the investigation, as long as the process is fair and transparent.

“I am disappointed with the way the Christchurch City Council continues to deal with this issue, forcing the situation three weeks out from an election and now advising media today that CCC isn’t in a position to make a decision on how we progress.”

Swiggs says to date, the investigation has followed a terribly flawed process. Even the investigator, John Matthews, was not aware of the complainants’ identities, mistakingly identifying one as male, and then having to correct his decision to say that person is female. Today Deon Swiggs is releasing an email from John Matthews that confirms this.

“As I have said before, it is immensely unfair that I have not been provided with the identities of the complainants and the fact the investigator was not provided with this information either is absurd. How on earth can he find materiality when he does not know the identities of these people which may be key to understanding their motivation for making the complaints?”

Deon Swiggs says he has never exchanged text messages, phoned or met with ‘Josh’ outside of official events and that the interview with Radio New Zealand contained a number of inaccuracies.

“I have released all of the messages I have ever exchanged with ‘Josh’ (excluding some event photos in order to protect his identity). The only places I ever saw him was at official events.”

“I am deeply disappointed at the weekend’s election result. It is clear the timing of the leak to media regarding these allegations did affect voters as early polling showed I was set to win the seat comfortably.”

“It’s amazing at how many people have reached out to support me and express disappointment at the election result. I am still committed to clearing my name and am consulting my senior legal counsel Phil (PJ) Shamy about the best mechanism to do this.”

THERE WILL BE NO FURTHER STATEMENTS OR MEDIA INTERVIEWS AT THIS TIME.