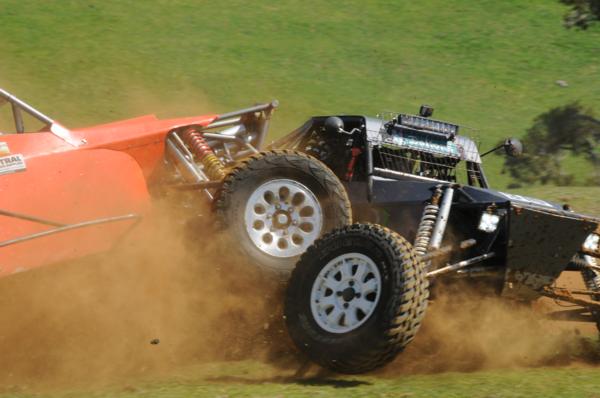 Spectacular unlimited-class offroad racing heads the programme at the final round of the national championship this weekend in the Hawkes Bay at Crownthorpe, and Nelson drivers Dan Fisher and Nevil Basalaj are headed there with a shot at overall glory.

Fisher drives a two-seater Chev V8 unlimited-class car. A recent inductee to the sport, he has scored maximum regional points in the regional rounds. Racing in the northern region this year, Fisher won class 1, was third overall and is one of just a handful who carry a full tally of 92 points to the finals.

Basalaj is a hard-driving, spectacular racer who drives a Chev V6 powered Jimco two seater race car which has contested the famous Baja 1000 offroad race in the US. He mainly raced in the south and likewise won his class to amass a full 92 point tally.

Held over two days on a massive farm inland from Hastings, this year’s final round has attracted a field of around 50 cars and four wheel drives that race the main championship categories, while the Kiwitruck youth categories have drawn nine entries.

Headlining the grid is an eleven-strong entry of the unlimited class 1 race cars, the ‘big bangers’ of the sport. This means Fisher and Basalaj go up against the fastest offroad racers in the country this weekend - drivers they have been racing all year in events held from northwest Auckland to the Waitaki Valley in the south.

Of the two outright north/south champions, only Brendon Old of Taranaki has entered the final.

National President Martin van der Wal says the final round is an unrelenting battle for class honours and the overall national title.

With a full day of short course racing on Saturday, spectators will see the fight develop across up to 11 classes; those who return for Sunday’s 250 km endurance race will see the champion crowned.

“We are very pleased with the turnout for the weekend, and the club has worked hard to create a fast, exciting course for both Saturday and Sunday.”

Most of the Hawkes Bay club members will be hard at work running the event but those contesting the event include Tony Gardiner in the unlimited class along with the father-son combination of Dean and Todd Graham in classes three and five.

The 2019 New Zealand Offroad Racing National Championship finals will be raced on farm land off Matapiro Road in Hawkes Bay, with the venue signposted from Fernhill. Spectator admission is $10 and racing starts at 10.30am.