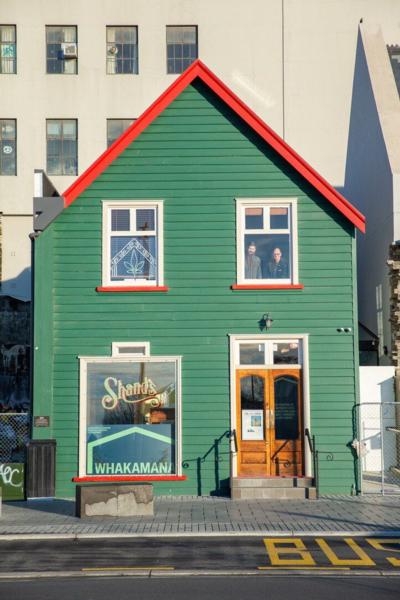 Abe and Michael Look Out From Shands CREDIT: Supplied

Christchurch’s oldest wooden commercial building will re-open to the public tomorrow for the first time since the September 2010 Canterbury earthquake.

The fully restored 159 year old Shand’s building, which has a Heritage New Zealand category one listing,  was moved from Hereford Street on June 27th 2015, and now houses Whakamana -The New Zealand Institute for Cannabis Education, Research and Development.

“Shand’s will be open for a gold coin donation which will go towards the restoration of the former Trinity Church, which it sits alongside,” says Mayell.

“As the first stage of our plans, Shand’s will be a boutique Cannabis Museum, (featuring displays from the original Whakamana in Dunedin), and open to the public, Tuesday- Sunday 11am 3pm. It is also where our Whakamana offices, meeting spaces and social club room operates from.”

Whakamana plans to be the “trusted place for all information about cannabis”.

Gray, who has 20 years experience in the cannabis industry, says the focus at Whakamana is on education, and re-opening Shand’s as a boutique Cannabis Museum is an important step in that plan.

“Being informed and understanding the issues related to cannabis, is absolutely essential to making good decisions,” says Gray. “Cannabis has been used in some cultures for thousands of years. It used to be the number one industrial crop globally and many don’t know that medicinal cannabis was legal in this country less than a hundred years ago.”

The ultimate plans for Whakamana include the development of a hemp food eatery, an alcohol-free nightclub, a plant-medicine shot bar, a hemp emporium and a cannabis dispensary (should the 2020 referendum see the law allow for this).

Mayell says a Pledge Me campaign to raise at least $1m will get under way in November with shares in Whakamana available for purchase. Pre-registration is available here.

“This is a community project,” he says. “This New Zealand first will be owned by the public for the public and as interest has already been very high, we are confident that we will reach our goal.”