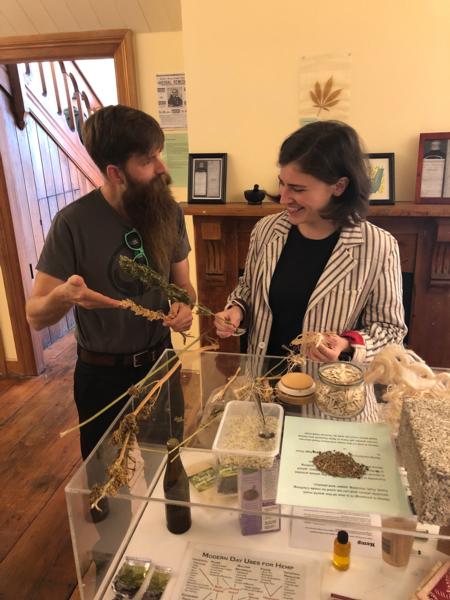 Shand's Reopening Tomorrow For The First Time In Nine Years

Christchurch’s oldest wooden commercial building will re-open to the public tomorrow for the first time since the September 2010 Canterbury earthquake.

The fully restored 159 year old Shand’s building, which has a Heritage New Zealand category one listing,  was moved from Hereford Street on June 27th 2015, and now houses Whakamana -The New Zealand Institute for Cannabis Education, Research and Development.

“Shand’s will be open for a gold coin donation which will go towards the restoration of the former Trinity Church, which it sits alongside,” says Mayell.

“As the first stage of our plans, Shand’s will be a boutique Cannabis Museum, (featuring displays from the original Whakamana in Dunedin), and open to the public, Tuesday- Sunday 11am 3pm. It is also where our Whakamana offices, meeting spaces and social club room operates from.”

Whakamana plans to be the “trusted place for all information about cannabis”.

Gray, who has 20 years experience in the cannabis industry, says the focus at Whakamana is on education, and re-opening Shand’s as a boutique Cannabis Museum is an important step in that plan.

“Being informed and understanding the issues related to cannabis, is absolutely essential to making good decisions,” says Gray. “Cannabis has been used in some cultures for thousands of years. It used to be the number one industrial crop globally and many don’t know that medicinal cannabis was legal in this country less than a hundred years ago.”

The ultimate plans for Whakamana include the development of a hemp food eatery, an alcohol-free nightclub, a plant-medicine shot bar, a hemp emporium and a cannabis dispensary (should the 2020 referendum see the law allow for this).

Mayell says a Pledge Me campaign to raise at least $1m will get under way in November with shares in Whakamana available for purchase. Pre-registration is available here.

“This is a community project,” he says. “This New Zealand first will be owned by the public for the public and as interest has already been very high, we are confident that we will reach our goal.”

Shand’s started life in 1860 on land owned by John Shand. The building housed professional offices until its conversion to shops in 1977 when it was named Shand’s Emporium. Over the decades since 1977, Shand’s has been occupied by a vintage clothing shop, watchmaker and jeweller, second-hand book seller, and other bric a brac retailers.

Shand’s was closed after the 2010 earthquake, and buildings each side of her were then more damaged in Feb 2011 quake. Shand’s was not damaged but badly neglected over the years until the Christchurch Heritage Trust saved her from demolition, and moved her to Manchester Street to sit beside Trinity.

Christchurch developer, Antony Gough’s family owned the Shand's building for more than 75 years, and were determined to save it.

It was the second time the Shand's Emporium building had escaped demolition. In the late 1970s New Zealand Post Office had plans to build a new telephone exchange in Hereford St on land incorporating the Shand's Emporium site. Several thousand people signed a petition calling for the building to be saved and it was eventually given a reprieve.

Initially the lease  provides for a five month occupation period with the option for Whakamana to occupy Trinity when its restored.

Chair of the Christchurch Heritage Trust, Dr Anna Crighton said of the agreement with Whakamana, “Repurposed again since its move from 88 Hereford Street, the Trust is delighted for Shand’s to take on a new exciting role in the central city, that of a Museum. Today, Shand’s stands proudly on its new site in Manchester Street, with its revived livery of green and red – a tribute to her strong and indomitable character and a reminder of her role as a portal to the past and forward into the future.”

Whakamana: the New Zealand Institute of Cannabis Education, Research, and Development will be based in the historic Shand’s Emporium, the oldest commercial wooden building in Christchurch, and the historic Trinity Church. The buildings sit side by side on the corner of Worcester and Manchester Streets and have been restored by the Christchurch Historic Trust.

Whakamana will be developed in two stages:

Stage One sees Whakamana leasing Shand’s for five months and creating a PledgeMe crowdfunding campaign seeking $1 million+ to transform the adjoining Trinity into a world class cannabis educational experience. That campaign is due to launch on November 11.

Stage Two will commence once the money has been raised, allowing the finishing of the Trinity building reinstatement, and opening of the hemp eatery, alcohol-free nightclub and plant-medicine shot bar, and a hemp emporium.

Whakamana’s social purpose is to improve lives and restore the planet through plant power, and the organisation's vision is to be the trusted source of cannabis education, research and development, to further that purpose.

Michael and Abe both expressed ‘immense gratitude’ to the Trustees of the Christchurch Historic Trust for the wonderful job they have done restoring these two Christchurch landmarks. “Shands Emporium and Trinity Church's history will be acknowledged and their new life as an Institute dedicated to Earth’s most versatile vegetable was a fitting next chapter for these 150 year old icons” they said.

Abe and Michael, who met at the inaugural iHemp Summit in Wellington last year, will be based in Shand’s for the next five months and will be hosting crowd funding information and cannabis educational evenings with a different focus each night.

Abe Gray is a Botanist and Science Communicator with 20 years of experience in the Cannabis Industry. Originally from Minnesota, USA, he has lived most of his adult life in New Zealand where he gained his Bachelor’s and Master’s of Science degrees in Botany at the University of Otago in Dunedin. He combined his 20 years of experience as a cannabis legalisation activist with his 15 years of experience as a tutor and guest lecturer in Biology to found New Zealand’s first interactive cannabis educational experience, the Whakamana Cannabis Museum, in 2013. He is also the primary caregiver to his two children while his wife works as a surgeon. Abe lives in Christchurch and enjoys tramping, bike riding and bird-watching in his spare time.