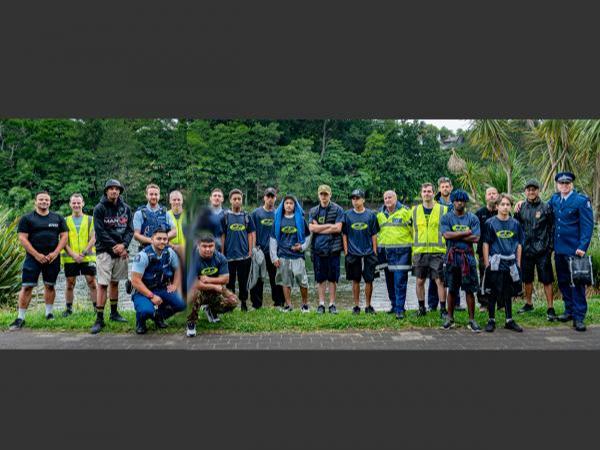 A group of ten young Waikato men involved in a programme aiming to turn them away from anti-social behaviour have recently celebrated their progress with a cycling and paint-ball event.

A team of youth-focused Police and Blue Light organised the mid-December event, which allowed the group to celebrate their achievements, accomplishments and growth since being involved in the programme.

The event saw the boys cycling 14km along the Waikato river path from Roose Commerce Park to Hinterland Adventures for paint-ball, before embarking on the final 9 km leg and ending at The Point, Ngaruawahia.

Some of the young men had previously been involved in behaviour which brought them to the attention of Police, including as members of a local ‘wheelie gang’.

While the group began with the best of intentions, the boys found themselves being controlled by older bullies and thieves, with complaints about them beginning to make the local news.

With a few ‘bad apples’ ruining others’ enjoyment, some of the group began to get involved in thefts, robberies, traffic disruption, and other anti-social behaviour.

For nearly two years now Police have been working with the boys alongside key stakeholders from around Hamilton, working to develop strategies such as, alternative actions, mentoring and working with Orangi Tamariki to turn their behaviour around.

With some tough love, Police involvement and the support of victims, the boys have made a huge improvement in their behaviour.

Youth Aid Officer Constable Paul Tierney shares his view with the aim to provide closure for some, hope for young people and awareness for all.

“These few, mostly boys, felt invincible. In their minds they were having fun with like-minded mates but things were escalating, and soon they were targeting cars and members of the public,” says Paul.

“We really feel for the victims of these crimes and we understand their frustration and despair but also in many cases their desire to see the young person helped.

“Throughout the year, with a lot of effort from Police and other agencies, victims, the professionals working on cases, and the churches, community groups and volunteers in between, we have seen the behaviour of these young men change.

“The lads had proven they can be trusted, are willing to be mentored and to learn, and that they are prepared to be role models themselves.

“By investing in them now we hope they have bright empowered futures, and we wish them all the best doing so.” says Paul.

This event used Electrify Hamilton River Riders bikes and with EVO cycles providing a lead bike and rider then additional support from Mad Mex. The day out was possible thanks to donations to Hamilton Blue Light as well as with volunteer support.