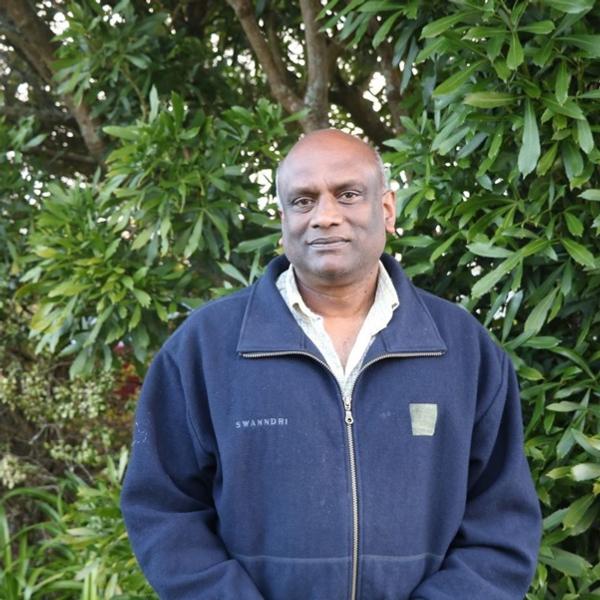 Soil Scientist Gordon Rajendram is committed to helping New Zealand farmers get the most out of their soil so that their farm can work more proficiently, be sustainable while increasing the farm profitability.

With BSc, MSc and a PhD to his name, Gordon is one of the leading experts on laboratory measurement techniques for chemical, biological and physical properties in materials.

With a comprehensive and wide-ranging knowledge of IANZ quality systems and procedures in order to have a laboratory, and its testing methods IANZ accredited, Gordon has over twenty six years’ experience in the laboratory, field and research expertise.  This is just one of the myriads of reasons on why Gordon is considered one New Zealand’s leading Soil fertility experts.

Gordon has been nominated for the AgResearch for Kudos Awards: Scientist of the Year in 2008 for work done on the soil sulphur test and its agronomic advice.  He was also nominated by Ministry of Science and Innovation (Peter Maxwell)/Hill Laboratories for Kudos Awards: Science Entrepreneur of the Year in 2010 for his work done on precision farming.

In 1998 Gordon helped with the quantification of cations and anions leached from NZ dairy pastures in a 5 year study. Study carried out in Waikato, Taranaki and Southland. This work has benefited agricultural science, farmers and also the fertiliser industry.  “This work benefited fertiliser companies in that dairy farmers were recommended to apply 20 kg/ha Mg per annum due to leaching of this element from dairy pastures,” adds Gordon.

“In 2002 I was able to show that labile nutrients and physical properties in soil could be accurately predicted using Near Infrared rapid measurement technology,” comments Gordon.

Then in 2008, Gordon invented Pastoral soil N test for New Zealand which would be a benefit to NZ agriculture in a massive way. It’s the strategic use of N fertiliser on areas of farm based on the N status (Organic –N) of the soil. “This work is probably my best and most valuable to New Zealand,” says Gordon.

This is just a few of the many achievements in Gordons storied career. If farm consultancy is something you need, then make sure you get the best in New Zealand, the soil scientist Dr Gordon Rajendram out to your farm today.