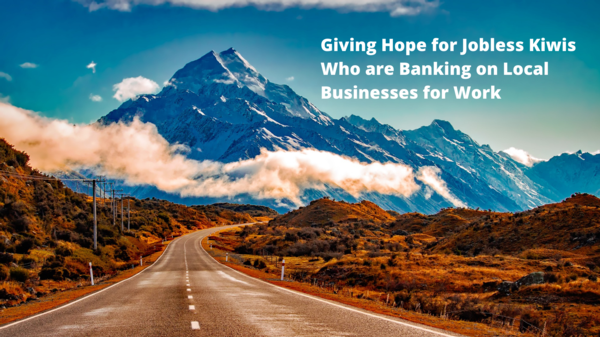 Giving Hope for Jobless Kiwis Who are Banking on Local Businesses for Work CREDIT: Urban Care

Based on a  Bloomberg article centered on the rising unemployment rates in New Zealand, the statistics from Statistics New Zealand now show that the number of people that fall under “unemployed” results in 151,000. This translates to a rate of 5.3% from the previous 4% last quarter. While this is in line with forecasts placed early on by economists, the increase is the highest recorded quarterly growth since unemployment rates have been recorded way back in 1986. In a not so surprising turn of events, employment rates have also shown the lowest growth for the previous quarter. This is the shortest growth line that’s been seen in the charts since midyear 2013. The Reserve Bank of New Zealand or RBNZ also forecasts that unemployment rates will rise to 8% by the last quarter.

A larger scope and scale to measure the unemployment in today’s COVID-19 infected scene are those underutilized. These are those who have lost their jobs but have decided to halt their search for new roles. The rate has gone up to 13.2% to 12% from the 2nd quarter.
Tackling the Problem - Light in a Dark Path

With the heavy statistics aforementioned, it is not hard to comprehend that even months into the pandemic Kiwis are either hanging by with the government’s wage subsidy, have been laid off, or have ceased their hunt for new employment. The last probes that even if employers have proceeded again with hiring, vacancies are still lean for Kiwis.

To tackle this issue companies around New Zealand have placed their efforts in making user-friendly platforms that connect job seekers to prospective employers and ultimately, create more volume of work for Kiwis to send their offers to.

One initiative comes from the House Cleaning platform, Urban Care, spearheaded by Sam Bhandari. They’ve reconfigured their services into a free platform where clients (employers) may place their job posting online and Urban Care will notify workers from their pool who are relevant to the vacancy. Afterward, the customer connects with the best offer received. Prior to Urban Care’s initiative to make this a gratuitous service, applicants were charged once a customer responds to their application or offer.

From the initial job postings that focused on home-related tasks, Urban Care’’s explorable categories have now expanded to over 700-delivering more help to those affected by the pandemic.

Despite the steeper underutilized measure rates this quarter, there are Kiwis that have made it a point to do their part by redeveloping themselves in line with the change of time. A prime example is a displaced 40-years old Tourism worker, James Pocock, who was laid off from his role as a tour guide for Pure Glenorchy. He was proactive and moved forward by upskilling and learning Agriculture through the means of the initiative of the Southern Institute of Technology (SIT). The program by SIT is a government-funded course that aims to educate people displaced by the pandemic regarding agriculture. Rural Contractors New Zealand president David Kean shared that they have been trying for over 3 years already to bring in more Kiwis to the agricultural industry. This spells out the perfect chance to hit two birds with one stone.

Moreover, Go With Tourism, spearheaded by Auckland Tourism, Events & Economic Development, commenced in April of last year, with an aim to help with a skills shortage in the Tourism and Hospitality industries. In this critical time, they play a special role in bridging job seekers in searching for employers.

Albeit this quarter’s unemployment rates hit the lower (and better) part of the predicted range of increase, New Zealand’s labor market journey to thriving from surviving is still perilous. Although still not out of the long winding tunnel which is COVID-19, there is a light that shines even halfway through the path-initiated by goodhearted influential people who aim to ease the burden.