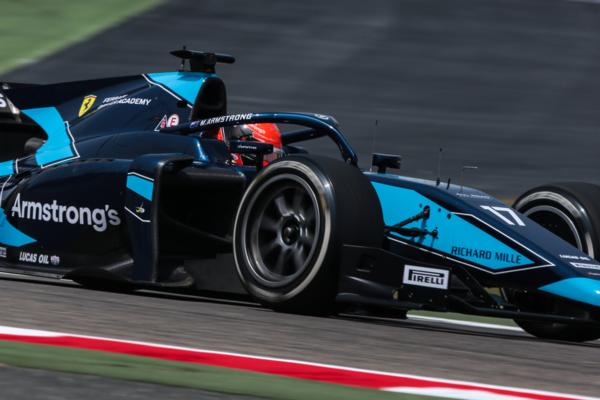 Storming through the field in the feature race at Bahrain CREDIT: DAMS/Dutch Photo Agency

New Zealand driver Marcus Armstrong has finished fifth in the final race at the opening round of the 2021 FIA Formula 2 championship.

Driving with his new DAMS team in the three-race championship opener session at the 5.421 km Bahrain International Circuit, the 20 year old racer had a mechanical issue that put him out of the first sprint race, then bounced back with a top ten finish in the second.

Armstrong put in a storming drive in the longer feature race, carving through from a start position of 14th to score fifth and then bank ten points.

“The conditions were quite extreme here this weekend but we were fast, whatever the weather threw at us. We had very positive long run pace, especially on soft tyres.”

Armstrong said the car lacked power from the beginning of the first race and then “eventually it just let go.”

In the second sprint race he charged through the field, running as high as second.

“A podium could have been possible but we didn’t have a new set of tyres to put on.”

Finally, in the Feature Race “we had a good strategy, we came through the pack and we managed our soft tyres very well. The Safety Car came in one lap too early and I didn’t have any temperature in my tyres to attack hard, but the important thing is we took home some strong points.”