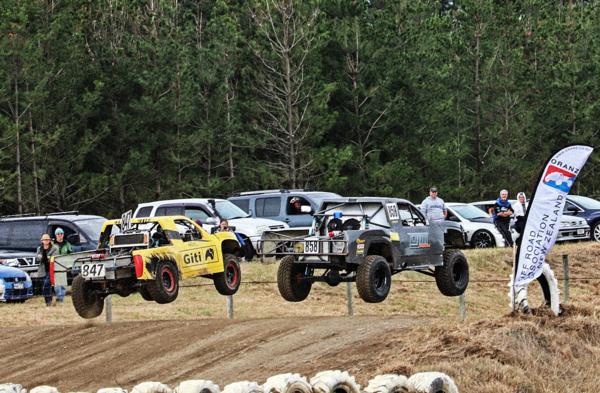 Winning the first heat by half a lap was a good start to the 2021 offroad racing championship for Christchurch driver Bryan Chang.

Having the Giti Chev truck's gearbox break in the closing moments was 'less good'.

"The truck loves this track, this is where I set it up for racing and I was trialling a new rear end setup that really got the tyres biting off the start and in the slow corners. But then first gear started making a lot of noise," he said.

Duelling with Nelson drivers Bruce McKenzie and Darrin Thomason off the start line of the first heat, Chang launched the Chev over the big table-top jump and grabbed the lead. From that point the race was under control.

"It ended up we were most of a lap ahead. Everything was going strong, and then first gear went on strike. There was nothing to do but nurse her to the end of the race and put her on the trailer.”

Chang says to come away with second in class and a decent benchmark against the more powerful tracks in his class was 'good enough'.

"We had a big push to get the truck ready for this one after the damage done at the stadium championship up north, so this is a good starter, points on the board for the main title."

The Giti Chev was damaged at the New Zealand Stadium Championship, held in February and March, which drew a record entry of 107 racers including 17 trucks.

Chang was an innocent victim of a multi-truck pile-up in an early heat and had another truck - the massive Nissan Titan V8 of Raana Horan - reverse onto the bonnet of the Chev. The Chev lost body panels and its front suspension also sustained damage that would eventually put him out of the racing.

"I’d fixed the mechanical stuff, and sent the truck's broken panels away for repair and painting which pushed us close to deadline for this event. Until the Friday morning I really wasn't sure we'd get everything done in time," he said.