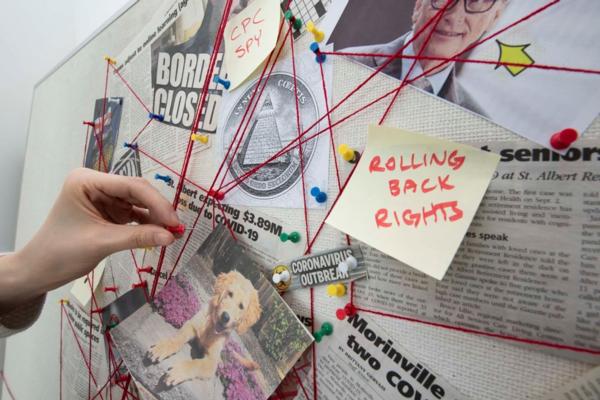 We are living in a time when the media insults our intelligence by calling us conspiracy theorist and yet the media its self has conspired to keep the official story; the only story. Everything else is termed a conspiracy.

They have conspired to shut down any debate, any and all discussion between those professionals and experts whose job it is to discuss such important things such as harm of lock downs, harm of novel new biologic injections.  It has been the media’s  job to demean and insult anyone who dares challenge the official story by calling them ‘conspiracy theorists.  This term is bandied about by Government officals and MP's and Media alike.  It is used to discredit and silence debate or discussion.

The government, the Prime Minister an MP's have conspired to not allow Mp's to say anything that might stop the roll out of the new novel biologic, by challenging or questioning or you know, actually representing their electorate in any meaningful way. The PM has conspired with her ministers to enforce this. The health ministers have conspired to keep their concerns out of earshot of the public and the media have conspired to do their bit and call anyone and everyone who dares step out of line, nasty names.

As we have seen good Doctors have been told to keep quiet.  Their bosses have conspired to enforce censoring. Yet people who naturally question, intelligent people, people who trust their gut feelings over media click bait headlines and hysteria have all been derided by those who conspire against us to spin a story that is slowly unravelling at its edges.

Who coined this term conspiracy theory?  Some say the CIA, but fact checkers apparently say no that’s not true, and set about conspiring to deter would be researchers off the trail.

Let us have a wee look at this term that both government and media seem to love to paint us with.

The Term “Conspiracy Theory” — an Invention of the CIA

…”…Since the 1960s the label has become a disciplinary device that has been overwhelmingly effective in defining certain events off limits to inquiry or debate… Conspiracy theory’s acutely negative connotations may be traced to liberal historian Richard Hofstadter’s well-known fusillades against the “New Right.” Yet it was the Central Intelligence Agency that likely played the greatest role in effectively “weaponizing” the term. In the groundswell of public scepticism toward the Warren Commission’s findings on the assassination of President John F. Kennedy, the CIA sent a detailed directive to all of its bureaus. Titled “Countering Criticism of the Warren Commission Report,” the dispatch played a definitive role in making the “conspiracy theory” term a weapon to be wielded against almost any individual or group calling the government’s increasingly clandestine programs and activities into question.

This Memo throws a lot of light on how to conspire to influence peoples flow of information.  It is mostly done by governments with things to hide.  Directives given to media to ensure only one side of the story is given more emphasis and all others denied or decried. It seems to have become their Modis Operandi: MO.

You can read it here in its original form.

Or you can read it here printed out in an easy to read format.

What a great idea, let us apply this to a couple of NZ media statements. I think we can also use it in place of another term the media love to use; ‘false information.’

this from Stuff ….”…A group of anti-lockdown academics is being called out for promoting conspiracy theorists. …”…

Let’s do it again this time with the actual reality

here is another one

Newsrooms Marc Daadlder writes…”…. The rollout of a Covid-19 vaccine in New Zealand could turn into a social and political flashpoint over misinformation, community engagement and conspiracy theories, but experts are concerned the Government isn't ready for that..."...

now let’s use our words.

..."...The rollout of a Covid-19 vaccine in New Zealand could turn into a social and political flashpoint over independent researchers, community engagement and independent research and analysis, but experts are concerned the Government isn't ready for that..."...

Changing the wording, a different meaning arises.  This is crucial to understanding how the media and governments themselves conspire to censure questioning of the official story and alter the public’s perception against those doing independent research.

They  would have had to ‘conspire ‘ to be in such perfect lock step wouldn’t they? Or is that a conspiracy?

it must be remembered that every time the media demonise people with that old term it’s because they are guarding the gates of the official story so that you won’t interfere with their roll out. Re read the memo again. So that you won’t get people thinking, that your independent research and analysis won’t reveal their official story is the real mis information and they haven’t been completely honest with you at all.

…”….“Conspiracy theory” is a term that at once strikes fear and anxiety in the hearts of most every public figure, particularly journalists and academics. Since the 1960s the label has become a disciplinary device that has been overwhelmingly effective in defining certain events off limits to inquiry or debate…”…

Its obvious with all the censoring and lack of debate and discussion on the issue, that officials and media have conspired to make it that way.   Shutting down  those independent researchers  and their independent research an analysis would have to have involved the ability to conspire  or is that a conspiracy?

Note: I am well aware that there are many crazy ideas out there, but this is not about those. This is about people, doctors, experts professionals in their field and ordinary intelligent people who have felt something is not right about any of this and set about doing their own ‘independent research and analysis, using credible official sources and being shut down by a system using derogatory terms to stifle, censor and shut down debate and discussion on something that affects all of us.