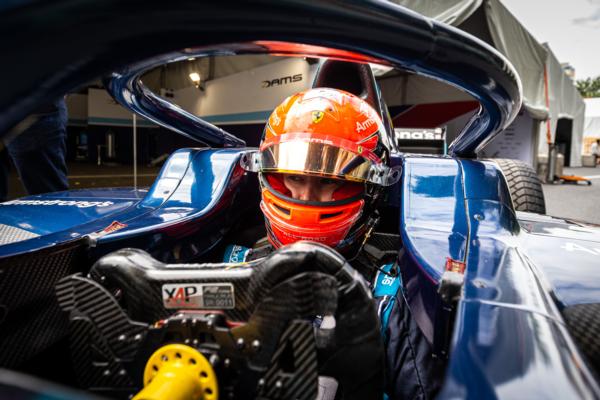 Out of the pits and into the points at Baku CREDIT: Mark Baker

Marcus Armstrong has scored more points in a tough weekend of racing on the streets of Baku in Azerbaijan.

He added to his tally in the first sprint race of this weekend’s round of the FIA Formula 2 Championship.

On the narrow and fast Baku circuit in Azerbaijan, the Kiwi driver held on to seventh overall to add to his points tally.

He was not so fortunate in the chaotic second race, which was the 100th of F2’s modern era. There were two safety car periods and six cars of the 22-strong grid did not finish after multiple collisions. Armstrong was squeezed into the wall early in the race and the car was damaged too heavily to continue.

The final race of the weekend on the 6.003 km Baku circuit saw the young Kiwi start from the third row of the grid with the potential to score points again, but he was dragged into another multi-car incident and was once more unable to continue.

“So a tough weekend. We didn’t get the results we all deserved. Today was especially tough with someone trying to win a 28 lap race at turn 3. We leave Baku disappointed but there are definitely some positives to take away. We had strong pace in practice and secured our best qualifying of the season before taking points in the opening sprint race.

"In Saturday’s second race we were running well, but I made a mistake and ended in the wall. Then we got a good start in Sunday’s Feature Race, picking up a place into Turn 1, but we were hit into Turn 3 and forced to retire. It’s very frustrating, but we have to take the positives and come back stronger.”

As the F2 Championship heads for Silverstone in the United Kingdom in mid July, Armstrong is 14th equal on 12 points alongside team-mate Roy Nissany.