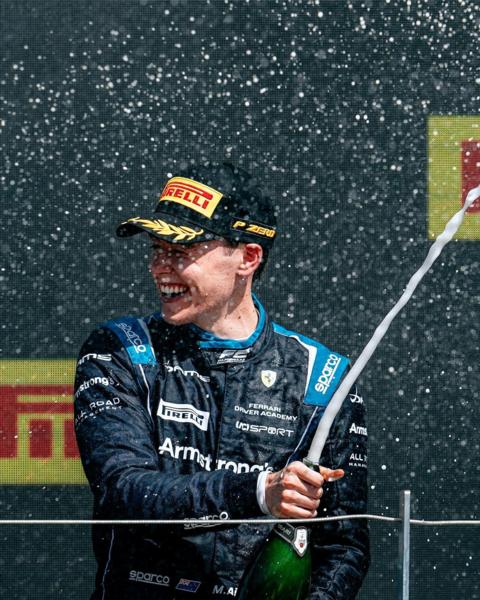 After an epic battle in the first Formula 2 sprint race at Silverstone, Marcus Armstrong has taken a podium finish in the second, fighting off all rivals to defend his position throughout the 123.7 km race.

In race one, an early spin by championship leader Guanyu Zhou brought out the safety car and compressed the field. Armstrong had surged from the seventh row at the green light to be in the top four.

An intense battle over the following laps left the outcome undecided and a second incident on lap 12 once more bunched the field, leaving Armstrong inside the top ten but locked in a three way battle for sixth as the race resumed two laps later.

He crossed the line in ninth place, which put him on the front row in the partial-reverse second sprint race on Saturday afternoon.

Then in the second sprint – distance race the top three of Richard Verschoor, Armstrong and Dan Ticktum held their positions off the start line while the field jostled for the minor points-bearing positions behind them.

“Dan was quick, and I knew he would be because he was quick in the first race this morning. He's very quick in the high-speed corners it seems, and he managed to be very close to me the entire race, always within my DRS.”

Armstrong put in a virtuoso performance to deny his rival the podium position.

“I think the car was extremely strong today, it was also strong yesterday but I ran into a few issues, and we couldn't really extract all the performance but I genuinely feel we should be a lot further up the grid than what we've shown so far. Going to circuits like Sochi and Monza where I've had great success in the past it gives me a lot confidence.”

The return to more open race circuits has enabled Armstrong to give a glimpse of his true speed.

“It’s been a while but it’s great to spray the champagne again. We ran into a few issues at Monaco and also in Baku. So, it's sort of been a podium that's been taking its time. I would have preferred the middle step and I genuinely thought it was possible seeing as Richard didn't have a very good start this morning,” he said.

Today there is a longer feature race for the 22-strong F2 field covering 29 laps and a distance of 170.839 km. Silverstone is the fourth round - and the only UK round – of the 2021 FIA F2 Championship.

Marcus Armstrong first raced at Silverstone three years ago in the FIA Formula Three Championship. The Kiwi has been a member of the Ferrari Driver Academy for four years and is contesting his second season of Formula 2.