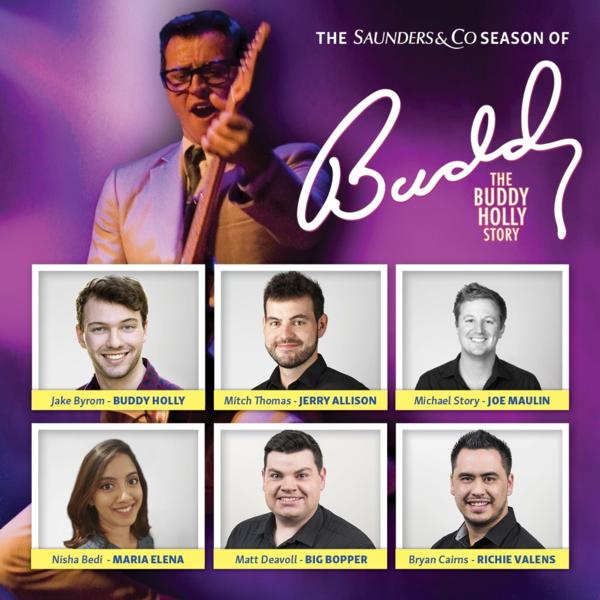 After last month announcing their first show back following a 15-month Covid-19 hiatus, Showbiz Christchurch has confirmed today that their production of Buddy – the Buddy Holly Story has been cancelled.

Showbiz had also programmed Buddy in late 2020 but the pandemic and resulting lockdowns meant it had to be cancelled then too.

General Manager, Craig Ogilvie, says he and the Showbiz board have been watching the situation very closely over the last few weeks, and this decision has been an incredibly difficult one to make.

“The 22-strong cast has continued to rehearse virtually and they have been amazing”, he says. “Of course our crew (including wardrobe and props) have been working hard as well. Buddy is a high energy show; that’s one of the reasons we chose it as our first show back – fun, feel-good and Buddy Hollys songs are very well-known. We are devastated that we can’t continue but the fact is, we can’t open in anything but Level 1 and there are no guarantees that will happen in time. This cast is incredibly talented but like any group of performers, rehearsing together in the same room (which we can only do under Level 2) is key to getting the chemistry and ensemble work working well, and we don’t believe there’s been enough time to achieve that.”

Buddy was six weeks into rehearsals when the Level Four lockdown was declared. Mr Ogilvie says a number of scenarios were considered including shortening the season, opening later or a combination of both. “It just didn’t stack up unfortunately”, he says and there no options to postpone it to much later in the year in another appropriate venue in Christchurch.

Director Sara Brodie and Musical Director Richard Marrett are disappointed for the cast but also for Christchurch audiences, who were clearly really looking forward to seeing Buddy.

“There was a buzz building about the show, tickets were selling very well with some nights close to selling out, and of course the cast were very excited about heading back to the Isaac Theatre Royal again, after such a long break,” says Sara.

For Jake Byrom who was cast as Buddy Holly, there’s a real sense of déjà vu around this decision.

“Before recently heading back to New Zealand, I was playing Barry Gibb in the UK production of Saturday Night Fever. We were about to embark on an international tour when Covid-19 put paid to these plans. It’s really disappointing for everyone but I am sure we will get through it together,” he says.

Those who purchased tickets through Ticketek New Zealand will be contacted directly by them and tickets can be refunded. All current ticket holders will also be offered an Exclusive Pre-sale opportunity for Showbiz’s next production of Matilda, in April 2022 when ticket sales for that production open in October.