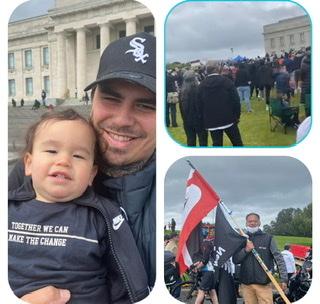 There was a hum of chatter as I arrived at Auckland Domain for the Freedom & Rights Coalition Protest. Nationwide Protests had been organised in 12 Locations around New Zealand. Amidst clapping and some shouts of agreement were Protestors with signs, flags, and mostly masked faces. Some had created picnic spots whilst many just stood. There was an almost tangible air of solemnity. Police were visible but an altogether quiet presence, stationed on the outskirts. Arriving a little later on the scene I tuned in to the devastating suicide statistics as they were being shared over the loudspeakers, "696 lives lost, 66 of them Children, as young as ten!". The Media moved through the crowds, trying to speak with Protesters and drones hovered above. I began to ask Protesters what brought them out today: almost all said to defend "Freedom of Choice". A Protestor, Eric Rameka, said, "Today whanau as you can see there's all Nationalities here. It's about Maori, Pakeha, Pacific Islanders, all nationalities coming together as citizens, making a stand about lockdown, freedom of choice and freedom of speech". Laneesha Folau, present with her Husband and toddler shared something that struck me. "Our bodies do not belong to the Government, our employers or schools. Coercion is not consent and we shouldn't be bribed to have a jab that hasn't completed full clinical trials." A helicopter suddenly whirred in the near distance, as the Protest wound down to an end. I took the opportunity to speak to an out spoken Public figure, Politician Elliot Ikilei. I asked him if he could say anything to the general public what would it be? "Don't allow fear to control you. If you want to get the vax, get it; if you don't want to get it - don't get it. Don't allow the Government to change us into a segregated Apartheid form of Society." A Teacher from Auckland, who preferred to remain anonymous, explained she also worked in a volunteer capacity, with struggling families. She was distraught with tears running down into her mask, explaining how she was helping a mother deal with her 19 year old son's attempted suicide. The teacher had to do this through Zoom. She balked at the fact that last week was Mental Health Awareness week. "The Lockdowns are playing with people's minds." As the vaccine passes are scheduled to come into play, the pressure mounts for the Covid vaccine hesitant (& the resistant) ...is it fair to ask how many more lives hang in the balance? As it stands we have lost more lives to suicide, than the actual Covid virus. Pilleus Project 2 October 2021 Auckland, New Zealand