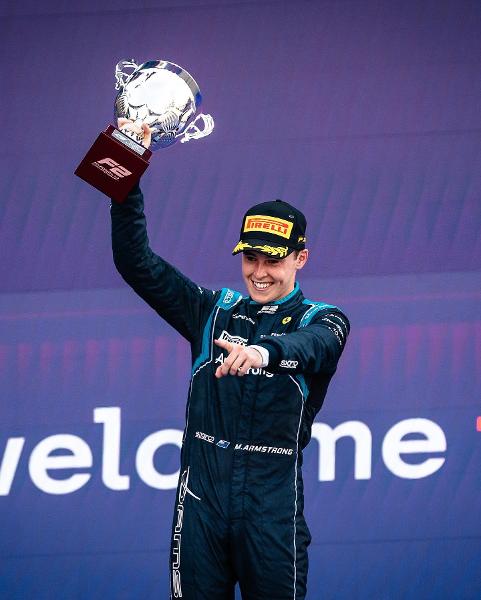 Armstrong becomes the first driver to win an F2 race at the 6.2km Jeddah Corniche Circuit.

Building on a top ten qualifying result, the resurgent Armstrong found himself alongside Lawson but was starting from the slower ‘dirty’ side of the track.

When the 20 km sprint race started though, it was Armstrong who judged grip and acceleration perfectly off the grid and then pressured Lawson into running wide at the first corner, setting the latter firmly behind him by turn three of the opening lap.

The Ferrari junior’s charge was temporarily slowed by a safety car period after a crash that ended the race for Guilherme Samaia and Marino Sato.

The safety car headed back into the pits at the end of the third lap but there was further drama when championship challenger Guanyu Zhou attempted a daring dive on Christian Lundgaard at the first chicane, found the overtaking room was not available and spun, damaging his front wing.

Pourchaire was the next retirement, losing control and hitting the wall, which brought out a second safety car. With just three laps remaining at the resumption of racing Armstrong controlled the restart and led all the way to the race finish.

The FIA Formula 2 championship was back on track after a two-month break, which some drivers adapted to better than others. The championship now heads to the season finale at Yas Marina December 10-12.