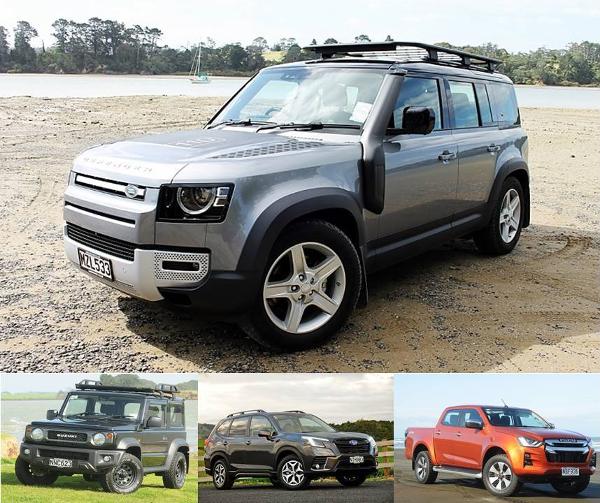 The Land Rover Defender has been named outright winner of the NZ4WD of the Year awards. It also picked up the Large SUV category award.

Announcing the awards, judges noted the Defender’s long and proud heritage of capability on and off the road in a history stretching back to the original Series I of 1947. They praised the investment made by Jaguar Land Rover in engineering and design effort that had so profoundly transformed the Defender into a vehicle which recognises many of the design cues of the original but is a thoroughly modern SUV.

Judge and NZ4WD magazine editor Mark Baker said the new Defender is “capable, comfortable and compatible with the expectations of a contemporary SUV owner”.

“Every so often a new vehicle comes along that rewrites category definitions. The new Defender does this.”

“The Jimny demonstrates an implacable sense of go-anywhere, any time capability that appeals to the hard core off-road community and the take-the-long-way-home commuter alike.”

Subaru’s Forester receives a gentle refresh going into 2022, and took its category win with a vehicle that blends Subaru’s outdoorsy image with the practicality of an urban wagon, “adding a tougher edge to what is already a sophisticated SUV.”

Utes, and in particular diesel double-cab utes, have topped sales charts in New Zealand over recent years. The judges found Isuzu’s new D-Max came to the NZ4WD Ute of the Year title fight “fresh out of the box and equipped with exemplary driving dynamics both on and off road.”

“This thing is truck-tough but inside it’s refined and sophisticated. Spec-loaded and equipped with an inviting interior and a willing engine, it was a clear winner.”

NZ4WD is the leading magazine catering to the 4WD ute and SUV owner and brand audiences in New Zealand. This is the magazine’s 25th year of publication.