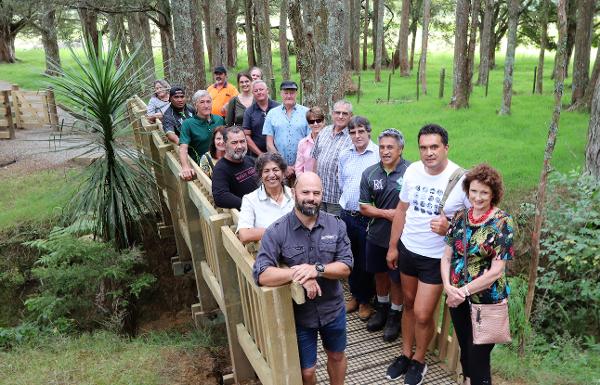 Some of those who gathered for the official opening of an upgraded section of the Te Araroa Trail at Kerikeri recently. CREDIT: Northland Regional Council

A picturesque three-kilometre section of the Te Araroa length-of-New Zealand trail at Kerikeri has been upgraded and is now open for all walkers to enjoy.

"It’s money well spent. There has been positive feedback from the many members of the public who use the track," he says.

The Upper Kerikeri River Track was originally championed by Te Araroa founder Geoff Chapple as a route into Kerikeri as part of his epic vision for a length of New Zealand walk. It was one of the first developed.

The upper track, on public reserve, provides an extension to the well-established Lower Kerikeri River Track which is on DOC (Department of Conservation) land. The new track runs along a reserve beside the river from the Kerikeri Falls carpark to the State Highway 10 carpark and a coffee cart.

The work was done by Johnson Contractors with design and engineering support from Frame Group. It includes small bridges, ‘kissing’ gates and aggregate surfacing.

"The quality of work, and attention to detail of the small bridges and gates is for all to see and admire," says Mr Williams.

The agencies involved were welcomed during a recent opening ceremony and a blessing given by Kipa Munro, Chairperson of Te Rūnanga o Ngāti Rēhia Charitable Trust, who explained the values and importance of the area both to iwi and the wider community.

Jack Craw, who chairs the NRC’s Biosecurity and Biodiversity Working Party, says three other Te Araroa tracks are under construction nearby and all the Kerikeri sections will officially open in the lead up to the Te Araroa 2022 walking season which begins in Spring.

"Kauri protection work is happening across Northland by way of trail upgrades, pest control, fencing soil sampling and kauri sanctuaries like the one Ngāti Rēhia is developing."

"All this work is aimed at safeguarding our national taonga; kauri. Crown agencies and local government are working together on these projects and we are proud to work alongside communities and hapū and the regional staff of Biosecurity New Zealand - Tiakina Kauri, DOC and MBIE."

Councillor Craw says the Far North District Council has also agreed to maintain the Upper Kerikeri River Track where kikuyu, gorse, paspalum and wattle are among the challenges, while TANT is seeking ways to resource ongoing maintenance of the others.