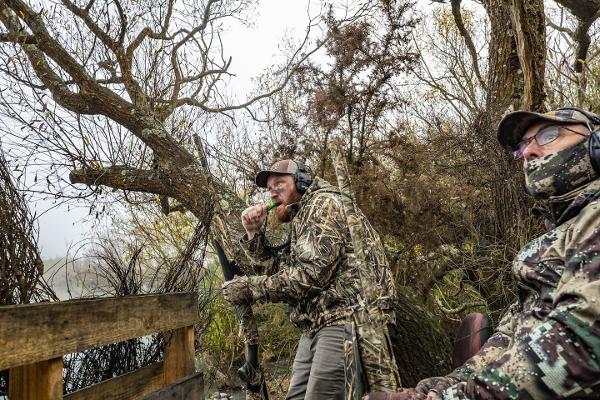 Stunning weather greeted around 50,000 game bird hunters around the country this morning

While the sunshine and light winds across the country might have been in the duck's favour, it didn't stop hunters from celebrating the traditional first Saturday in May, the Opening Day of the game bird hunting season.
The warm wet summer had contributed to increased duck numbers in parts of the country, increasing the chances of success for hunters looking to harvest wild, free-range birds for the dinner table.
New Zealand outdoors retailers compensated for the continued global shipping delays and ordered earlier than ever before to ensure hunters had adequate stocks for decoys, ammunition and other hunting gear before the season started.
Opening weekend is when many families come to gather sustainable, free-range birds for the months ahead.
Fish and Game has joined with Celebrity Game chef Angelo Georgalli to create the first-ever Fish & Game cookbook this year to help inspire and also challenge hunters.
Offering loads of recipes for hunters to experiment with, the cookbook came from hunters wanting inspiration for cooking their game birds.
Around the county, Fish & Game Rangers were out In force checking licences and seeing how opening day had gone for hunters.
In Northland, fine and settled weather made for challenging hunting conditions for the Northland hunters, although these conditions are great to support the social aspect of opening weekend.
A relatively damp summer season has resulted in good numbers of game birds in the region, which should have presented hunters with reasonable opportunity despite the weather.
Northland hunters are encouraged to use the "Take a mate hunting" licence available in the region to provide the opportunity for newcomers to get a taste of what it's all about for the nominal cost of $4.
Rangers have already confiscated four firearms for unlicensed hunters-a disappointing start to the season.
Despite a fine day with calm conditions, it's been an excellent start to the season in the Waikato.
Good duck numbers probably because the efforts we've put into minimising botulism outbreaks were successful.
Hunting was hard for hunters in the Eastern Region as early morning fog gave way to a blue sky day.
Those hunters in the Bay of Plenty fared better, as did those in the Gisborne area. All hunters reported birds harvested, and only one shooting with lead shot offence was detected.
In the Taranaki Region, a fine day greeted hunters, but there was plenty of hunting activity, and hunters were happy with how Opening Day has gone.
The wet spring and summer in the Wellington Region have created perfect conditions for the mallard population to flourish in the region with some of the best numbers we have seen in years, says Wellington Fish & Game manager Phil Teal. "The so-called summer we've just had may have been a washout for campers and beachgoers, but it's been a boon for the waterfowl population. "The late harvest of grain across much of the region has benefitted hunters and has likely kept more ducks around the lower North Island at this time of year as they haven't had to move around to find feed."
Mr Teal says duck numbers in Wairarapa are encouraging, with some of the highest numbers ever seen when staff were monitoring wildlife populations around Wairarapa Moana earlier in the year.
"The mallard numbers in the Manawatu River during recent population trend counts was quite staggering - twice what we observed last year - suggesting that overall, we have a very healthy duck population in the lower North Island and some great prospects for all hunters this season."
The West Coast region had overcast weather pleasing hunters, but a lack of wind limited success on larger water bodies.
Many hunters that had prepared in the preseason were rewarded with good tallies, with bag limits not being uncommon.
Looking into the season, with game bird numbers looking very healthy, it is now a matter of doing some scouting and going to the birds.
Compliance overall was relatively good, although a few hunters had to be reminded to read their regulations.
Nonetheless, it was fantastic to see many hunters out enjoying opening weekend as the social occasion it is well known for.
Nelson Marlborough hunters had a reasonable day given the weather was so perfect with a moderate number of ducks being harvested.
Compliance was high with all hunters reporting a favourable day with on two hunting offences deteced.
North Canterbury hunters battled fog in places, but good numbers of game birds were harvested, with the hunting getting better as the day progressed.
Central South Island Rangers around the Mid-Canterbury, Ashburton area had pleasant weather, which was in favour of the birds.
There was just enough wind to get the decoys moving and good numbers of birds in the air.
Compliance was relatively good, and there were hunters at every pond checked - which was a change from last year, where only about 40% of ponds were hunted.
On opening day, Otago rangers checked about 90 hunters across the region by noon.
Rangers worked in teams across Omakau, Springvale, Earnscleugh, Maniototo, Palmerston and Lake Waipori.
There've been mixed bags, but it's fair to say shooting has been fairly quiet at most locations in fine warm conditions with light wind.
Waipori was particularly quiet, with few ducks in the sky.
Hunters have come to the region for opening day from away as Nelson and Australia.
Five offence notices have been issued for shooting lead shot, hunting without a licence, and failing to produce a licence.
Fish & Game Rangers and police are investigating two loaded firearms found at an unattended maimai with lead ammunition Palmerston area.
Down south, in Southland, hunters were happy to have overcast conditions with a good breeze to help put some movement in their decoys.
Southland rangers reported that favourable hunting conditions resulted in some great harvests and that it was great to see families hunting together.