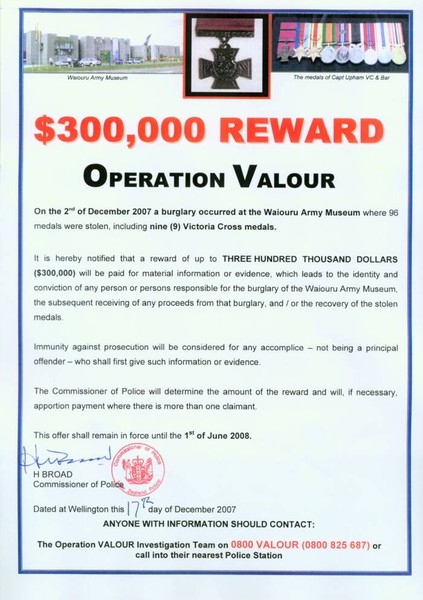 The Police Commissioner Howard Broad jointly with the Chief of the Army, Major General Lou Gardiner, announced today the largest reward ever offered in New Zealand for information leading to the safe return of the medals stolen from the Army Museum last month.

Commissioner Broad and General Gardiner said the reward of $300,000 is being offered through the generosity of Lord Michael Ashcroft, the owner of the largest collection of Victoria Crosses, and a New Zealand businessman who wishes to remain anonymous.

"We are extremely appreciative of these gentlemen's generosity which clearly reflects the high regard and importance these medals hold not only in New Zealand but also overseas."

The nine VCs and other medals have still not been located.

Commissioner Broad said it is hoped the reward, the largest ever offered in New Zealand, would encourage someone to come forward and provide information that would lead to the return of the medals.

"This theft strikes at the heart of New Zealand's proud military history and those who fought for this country. These medals were just reward for their bravery.

"I sincerely hope this announcement will reinvigorate the investigation and motivate someone to come forward."

Mr Broad said the delay in confirming the reward after Lord Ashcroft had announced his offer late last year was due to a number of factors.

"There are a very unusual set of circumstances concerning this reward. In normal circumstances Police have the authority under the law to make such rewards and there is a process for managing the reward and of course the decision as to who gets paid rest with me."

"In this case, the reward funds were being provided by private individuals and we had to ensure all parties clearly understood their responsibilities and how the process would operate. At the end of the day the key recommendation and the timing of the announcement of a reward wrests with the Officer in Charge of the investigation and the final decision and approval is made by the Commissioner."