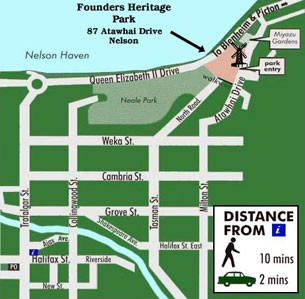 The Rutherford cottage at Founders Park will open to house a Kerstiens of Nelson outlet.
Exhibition on through 27 January 2008


To celebrate the opening of the Rutherford Cottage, an exhibition focusing on Ernest Lord Rutherford’s life is on in Founders’ windmill. The items are on loan from Nelson College where Rutherford was a student for three years until he won a scholarship to Canterbury University in 1890. The Rutherford exhibition was last seen five years ago when it formed the basis of a national touring exhibition.

Click here to read more about this historic building at Founders.


Founders Heritage Park is a replica historic village containing many of the old historic buildings and artefacts of Nelson. Special attractions include Dr Bush's Windmill, the Port Nelson Exhibition, vintage and horse drawn vehicles, fire engines and a working train. The chapel quietly plays organ music and the short-track train gives rides on weekends and holidays. Meeting and conference facilities and a commercial kitchen are available for hire.

Nelsonians created this historic townscape featuring real and replica buildings, much as they were in colonial days of the 19th century. Wander down the streets and alleys named after former city mayors and explore and enjoy Founders Heritage Park.

One of the park's biggest attractions is the annual Book Fair in June. Attracting thousands of bargain hunters pouring over tens of thousands of books, the fair creates such large queues that they reach out of the park and onto the street!

Park businesses and groups
A number of autonomous groups or societies operate within the Park together with a small number of business on leasehold, including Nelson Montessori preschool, Founders Brewery and Cafe, a child care centre, a gem shop, two clothing designers, a bakery, a mobile handyman and an iron worker.

Groups using the park facilities include:

The Nelson Railway Society
Vintage Car Club
Newman's Bus Society
and embroiderers and spinners groups.
These organisations are independent of the park management and may not always be open.

The park is also used as a venue for private and community events, including the Kitchen & Bathroom Show held biannually in May, your annual nine day Book Fair starting every Queen's Birthday Weekend in June, as well as weddings, receptions, rallies and meetings.


Location and Hours
Founders Heritage Park is located at 87 Atawhai Drive in Nelson.

Bookings
The Granary and the Jaycee Building can be hired for events and functions. Both venues are equipped with kitchen facilities.

The Chapel can also be hired out for Christian events.