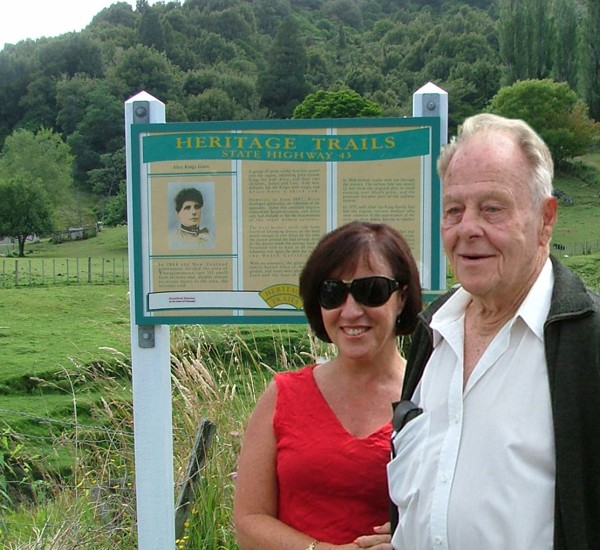 Alice King an inspiration to others

A new Heritage Trail sign was unveiled today, just outside Whangamomona, along SH43.

Ordinarily a new sign is not celebrated in any significant way; this sign is different. It commemorates Alice King, who was among seven families settled land around Whangamomona in 1884, when there were almost no access routes, no schools, shops or facilities of almost any kind.

Life for Alice was tough, and she eventually died of peritonitis, an infection of the appendix. Despite the doctor from Stratford riding the 65 kilometres as fast as he could on horseback (changing horses along the way), Alice died.

Since there was no local cemetery, the King family buried Alice in their front garden, planting two trees to mark the grave.

In 1914 the railway was put through Whangamomona, and in 1975 - well after the King family had left the region - railway workers unaware of the significance of the trees cut them down, leaving no marker of the grave.

The King family were outraged when they learnt of this, and disappointed further when driving the Forgotten World Highway to see Heritage Trail signs about many pioneers, but not Alice.

They began campaigning for a Heritage Trail sign for Alice, and on Monday this dream came true. Two members of the King family were present at the unveiling, Alice’s grandson and great granddaughter. “It means so much to us,” they said “to have a sign like this. We are extremely proud of our heritage and pleased to be able to share Alice’s story with all the tourists coming through.”

Deputy Mayor Neil Volzke attended the ceremony, saying that Alice’s history is significant for all of us. “We should remember people like Alice as pioneers of this district.”

When more than 10 people gathered at the sign, just north of Whangamomona, one got the feeling that Alice is at last being remembered.