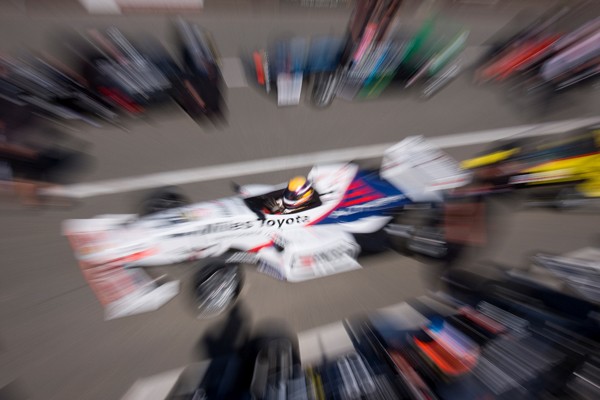 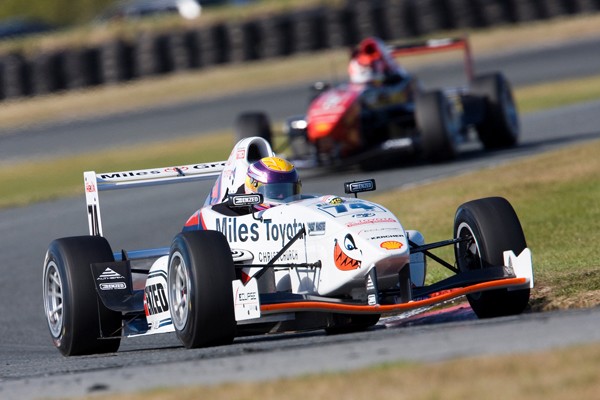 Rookie Michael Burdett, 17, took his first win in the Toyota Racing Series on Saturday afternoon at Teretonga Raceway near Invercargill.


It was the first win for a rookie this year and the first race win for the Motorsport Solutions team, which is new to the series this year and runs Aucklander Burdett and Nic Jordan.


Burdett’s win serves notice of his serious intent for the 2009 championship.


“We’ve got a very good car and the team have worked hard to get the set-up right. It’s great to be able to drive a car that doesn’t need too much work to get into a corner. There’s more speed to come too, and we are definitely looking to have a go at the title next year,” said an ecstatic Burdett afterward.


He took the lead from pole position, accelerating clear of Christchurch driver Andy Knight and gradually stretched out a five second lead.


Knight in turn was driving conservatively with his eye on maximising his championship points. Second place gave him back the championship points lead over Earl Bamber, while Lower Hutt’s Ben Harford preserved his third place in the title points battle by finishing third.


“We definitely need to focus on the title this weekend. I could have chased after Michael but I didn’t want a repeat of Manfeild where I spun off the track chasing someone for a track advantage,” said Knight


Earl Bamber had been relegated from pole to sixth on the grid for setting his fastest qualifying time while safety yellow flags were out on the circuit, then as the field moved to the grid the misfire that has plagued his car and that of his key rival Knight through testing and qualifying returned, forcing him out of the grid.


A magnificent fight-back through the field followed, with Bamber finishing the race in his original position: sixth. In the process he set fastest lap and a new Teretonga race lap record of 54.897, well inside the existing mark of 55.190 set by Daniel Gaunt in 2007. Bamber was the only driver to go under 55 seconds, and his new lap record is the fastest lap by any current tier one or tier two race category entrant.


Also up for grabs is the Chris Amon International Scholarship, a $30,000 boost to the successful driver’s international career aspirations. Rookie of the year – a chase currently led by Michael Burdett – carries a $7,000 prize and a $7,000 travel fund.


Teretonga is the world’s southernmost race track, and its location near the coast means weather can be a factor in race weekend results. The 2008 Toyota Racing Series uses an E85 ethanol-petrol biofuel blend, meaning this year marks the first such use of biofuels at Teretonga.

After 6 rounds of 7 and race 1 at Teretonga

Earl Bamber has scored eight wins, two seconds and three thirds in the 2007-2008 TRS.
Andy Knight has scored six wins, four seconds and four thirds.
Bamber has had one DNF (Ruapuna) and 13 podium finishes.
Knight has also had one DNF (Manfeild race 2) and 14 podium finishes.
Both Bamber and Knight have scored 15 top six finishes.
From the 18 races to date, the only other winners have been Harford (one win at Ruapuna and two at Manfeild) and Gaunt (one win at Manfeild)
Earl Bamber has not finished outside the top three in the last nine races.
Earl Bamber was born 9th July, 1990 (currently aged 17). He is the youngest TRS competitor currently and would be youngest ever winner of NZ’s premier single seater title.
Bamber has done three Rookie sessions for A1 Team New Zealand this season and has recognition in TRS as a member of the A1 Junior Development Team.
Knight’s Teretonga results in 2005 were seventh/second/tenth. In 2006 Knight was first/fifth and disqualified after winning NZGP on the road (tail light infringement)
Andy Knight was second in TRS points overall in 2005, third in 2006 and fourth in 2007.
Bamber has only previously competed at Teretonga in 2007, finishing ninth/fifth/DNF.
Bamber’s fifth place at Teretonga in 2006/2007 was followed by two fourth places at the Pukekohe finale - these were his only top six results during his first season.
Bamber finished seventh overall in the 2007 Series. His team, International Motorsport, has won the two previous TRS titles with Daniel Gaunt.
Teretonga 2007 TRS results for Bamber and Knight: Race 1 ninth/fifth; Race 2 fifth/fifteenth; Race 3 DNF/thirteenth (NZGP)
Daniel Gaunt has won 18 TRS races in four seasons; Andy Knight currently has 13 wins, Ben Harford has 10 wins and Bamber is fourth overall in TRS history with 8 wins.