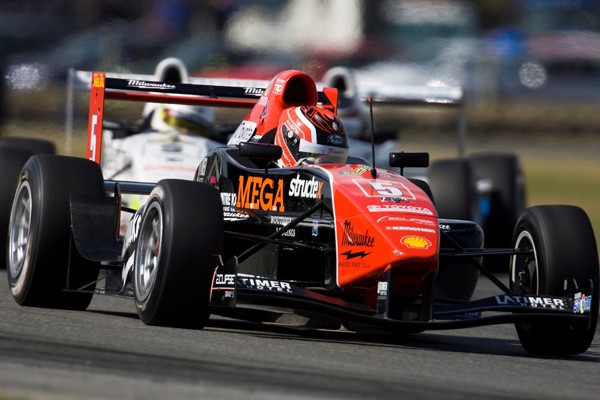 Andy Knight on his way to the 2008 Toyota Racing Series CREDIT: The MotorSport Company/SportProMedia

Andy Knight drove a perfectly-judged pair of races today at Teretonga near Invercargill to become the 2008 Toyota Racing Series title.


The series win came down to the final race of the season and even to the last corner of that race, with Christchurch-based Knight in his bio-fuelled Milwaukee Toyota race car fighting off a strong challenge from his key rival, Wanganui’s Earl Bamber.


It was a triumph of experience over youth. Knight, 22, has finished second, third and fourth in the series in past years; second-placed Earl Bamber is just 17 and is being groomed for a next step in his single-seater career. Knight took the championship lead at the first round and only surrendered it to Bamber at Timaru a week ago.


Bamber brought an eleven point lead to the final round, but had a testing time at Teretonga. A qualifying error saw him relegated to fifth on the grid for Saturday’s race, while a persistent misfire put him on the back row of the grid for both today’s races. This set the scene for three aggressive drives from the young racer, who carved his way through the field in each race to challenge Knight for the points lead.


Chased hard all weekend by Bamber, Knight stayed focussed on his title aspirations and drove defensively to a pair of second placings today behind Ben Harford and rookie Michael Burdett, holding out a charging Bamber in both races.


The title chase was decided in this afternoon’s 20-lap Spirit of the Nation race, which started dramatically when Ben Harford’s car broke its gearbox on the start line. The field managed to avoid the stricken Brother Toyota and Harford’s race weekend ended with the car being pushed off the track.


Michael Burdett led from pole position, with Knight tucked in behind him and Nic Jordan third.


Bamber made a spectacular charge down the left hand side of the grid from the back row as the field headed away, rising from the last row to be eighth at the end of the second lap.


By lap 4 the race order was Burdett-Knight-Jordan-Sam MacNeill, Mitch Cunningham and Dominic Storey, with Bamber rising to seventh place.

Bamber continued to attack as the race unfolded, overtaking Storey on lap 7 and then Mitch Cunningham on lap 14.


At the front of the field, Michael Burdett had opened up a significant gap on Knight, who was now being challenged by Burdett’s team-mate Nic Jordan.


As the field entered the last lap, Earl Bamber overtook Sam MacNeill around the outside of the fast left hand corner after the start-finish straight, moving into fourth overall. Heading onto the start-finish straight for the last time, Nic Jordan tried a similar move on Knight, but sledged straight on and was out of the race, leaving Bamber third overall and rapidly closing on Knight.


The title was decided just seconds later as Michael Burdett crossed the line to take his second race win of the weekend with Knight 2.4 seconds behind in second place and Bamber just one second further back in third.


Consolation for Bamber came in a new lap record, breaking the mark he had set the previous day: 54.611 seconds, set on the eleventh lap of the race as he pursued Knight.


Michael Burdett secured the rookie title ahead of his team-mate Nic Jordan, and with two race wins the rapidly improving Aucklander serves notice of his championship title intentions for 2009.