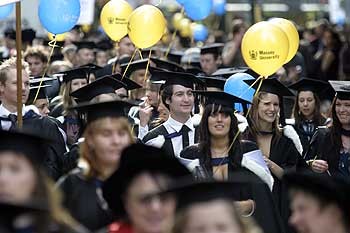 More than 1300 students will graduate in Palmerston North next week during the University’s major capping week - 1337 undergraduates and a record 37 PhDs.

Nine ceremonies will be held at the Regent on Broadway Theatre, with the graduation marquee in The Square hosting morning or afternoon tea and entertainment after each graduation procession.

The week starts with two ceremonies for graduates of the College of Sciences, at noon and 3pm on Monday 12 May. Guest speaker for the first ceremony is MP and Agriculture Minister Jim Anderton. The Massey Medal will be awarded at this ceremony to Noel Johnston, a Massey alumnus and farmer who has held roles in the agriculture industry from a director of Tui Milk Products to membership of the Ministry’s 2004 Flood Recovery Committee. Speaker for the second ceremony at 3pm is Howard Moore, Massey alumnus, executive director of BioPacific Ventures and a commercialisation expert. Mr Moore is also guest speaker at the Alumni and Friends graduation cocktail function on Tuesday evening at The Regent.

College of Business graduands cross the stage on the second day of ceremonies, with chief executive of Toyota New Zealand Alistair Davis the speaker for the first ceremony and businesswoman Annah Stretton, recipient of the 2005 Entrepreneur of the Year Award, speaker for the second ceremony. Mr Davis will also speak at the Business After 5 function co-hosted by Massey and Vision Manawatu in the graduation marquee on Wednesday evening.

Former MP Judy Keall is the guest speaker for Thursday morning’s ceremony, which includes graduands from nursing, midwifery, health science, psychology, Mäori visual arts and social work. Mrs Keall chaired the social services and health select committees during her time in Parliament, from 1984 to 1990 and 1993 to 2002. Graduands from the College of Humanities and Social Sciences in the afternoon ceremony on Thursday 15 may will hear from Colonel Tim Keating, commander of the 2nd Land Force Group at Linton Military Camp. The Extramural Students’ Society dinner will be held in the Coachman Hotel on Thursday evening, with Vice-Chancellor Designate Palmerston North MP Steve Maharey speaking, while the University’s graduation dinner will take place the same evening in the marquee in The Square.

A ceremony to honour Mäori graduates in all disciplines will be held on Friday at The Regent, with 68 graduates and their whanau expected at the ceremony. About half are receiving postgraduate qualifications, with three new PhDs being awarded. Speaker for the Mäori ceremony is Mäori Land Court Judge Craig Coxhead. Judge Coxhead is a former president of Te Hunga Roia Mäori o Aotearoa, the New Zealand Mäori Law Society.