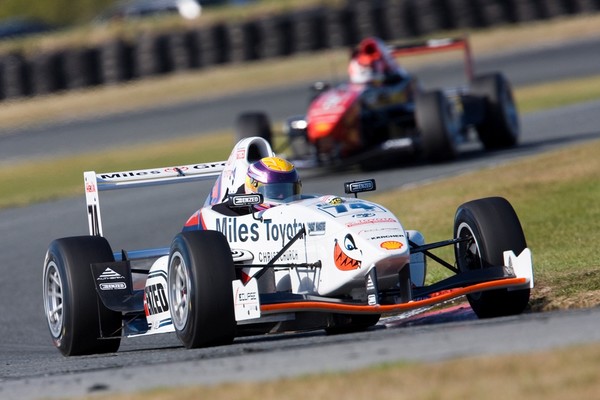 Top talent in action in toyota racing series at Ruapuna

The Toyota Racing Series enters its fifth season as New Zealand’s premier single-seater category this year, and once more the summer of motorsport is primed for some torrid on-track action as the best and brightest of New Zealand’s rising track stars battle for the championship.

At stake at this weekend’s opening round is the Wigram Cup – and an important points boost for the winning driver. In 2007-2008, Champion Andy Knight took the opening weekend points and created a momentum that forced the field to chase him down through the months that followed. Last year’s championship went down to the final corner of the last race and a fierce battle between Knight and rising star Earl Bamber.

A “graduation effect” opens up some opportunities this year in New Zealand’s premier single-seater championship. With Andy Knight now racing V8s and Bamber stepping up to A1GP and other single-seater drives, the way is clear for a new battle to begin.

The field this year includes series regulars back for another crack at the title, at least one Australian driver lured here by the test day Toyota held in Australia, and a fresh crop of aspiring young racers arriving from the ranks of Formula Ford.

Also returning for a second year is Australian Nathan Anthunes who proved he has the speed to run at the front of the field and challenge for race wins. There are further signings expected before the series heads into the January International segment of the series .

Once more, the championship promises to deliver close, exciting race action at every one of New Zealand’s established race tracks.

The three-round international series runs within the main championship structure and is raced at Invercargill, Timaru and Taupo.

Toyota devised TRS as a way to identify rising New Zealand race drivers and help them develop their talent before they head offshore.

Already, this “incubator” role is producing true talent, with leading graduates now racing in Europe, the UK and the USA.

Perhaps the highest profile of these is Brendon Hartley, third overall this year in Formula 3; and Earl Bamber, who now heads the New Zealand A1GP team’s championship challenge while also competing in the Asian GP2 series.

Hartley was the youngest driver ever to win a TRS race and is part of the Red Bull driver development programme; Bamber set fastest laps that stand as outright lap records at five of the 2007-2008 rounds, won the international series in the 2008-2009 season and won every race at the inaugural Hamilton 400 street race – the first time the TRS cars had ever run in the brutal confines of a street circuit.

The TRS cars are built from an Italian-designed Tatuus chassis and use a race-tuned version of a series-production 1.8-litre Toyota engine.

The one-make chassis and engine category means emphasis is placed on the drivers’ abilities to make good use of their team’s preparation. Drivers must not only have natural racing ability, they must understand how to make fine adjustments to get the best out of their car at every circuit. The series gives them essential experience at making their agile “wings and slicks” cars as fast as they can be.

“Where once drivers had to head offshore and then play catch-up with their rivals, they can now hone their skills in current-technology machinery here in New Zealand. By providing this opportunity and helping young drivers develop their capabilities as a driver the Toyota Racing Series is creating the perfect opportunity for the next star driver to join New Zealand’s current stars such as Scott Dixon, Greg Murphy, Brendon Hartley and Earl Bamber.”

Through a constant focus on technology and innovation, the series is also leading New Zealand motorsport toward a “greener” future.

Last season, all TRS cars were converted to run on an E85 biofuel blended fuel, which produced an immediate reduction in harmful emissions and measurable improvements in mid-range driveability. The cars ran without fault all season, proving the effectiveness of ethanol-based biofuels in motorsport. This year the cars once more head onto the track with the environmentally friendly fuel on board; other categories may well follow suit in future seasons.

New for 2008 are a carbon-fibre inlet manifold that is both lighter and stronger than the aluminium unit it replaces and for the TV viewer a new roll-hoop mounted onboard camera that will give a driver’s eye view of the on-track action.

The 2008-2009 Toyota Racing Series begins at Ruapuna Park Raceway on Friday November 28 with practice and continues with racing on the Saturday and Sunday.