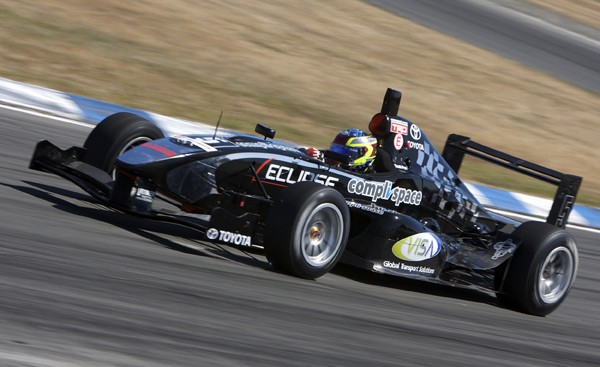 Australian Scott Pye has topped the timesheets in free practice sessions for the opening round of the Toyota Racing Series at Ruapuna near Christchurch today.

Pye, racing for the European Technique team owned by Trevor Sheumack, was a recent entry for this weekend’s round.

In the first session this morning – and his first “proper” session in a wings and slicks car – he posted a 1:21.076. He was followed by Whangaparaoa’s Alastair Wootten, who has moved up from Formula Ford to race in TRS. Wootten had posted his fastest lap of 1:21.146 three laps before.

Aucklander Mitch Cunningham, racing in his second season, was third fastest in that session, which was held in cool but fine conditions. He posted 1:21.251.

Mechanical problems beset Palmerston North’s Sam MacNeill, whose car developed a misfire halfway through the session; and 2007-2008 Rookie of the Year Michael Burdett, whose car jammed in sixth gear at the end of the front straight – travelling at more than 200 km/h.

“That was a bit exciting, going into the big left hander without being able to change down,” he said afterward.

Burdett and MacNeill were both able to solve their problems in time to front for the afternoon session.

At stake at this weekend’s opening round is the Wigram Cup – and an important points boost for the winning driver. In 2007-2008, Champion Andy Knight took the opening weekend points and created a momentum that forced the field to chase him down through the months that followed. Last year’s championship went down to the final corner of the last race and a fierce battle between Knight and rising star Earl Bamber.


Through a constant focus on technology and innovation, the series is also leading New Zealand motorsport toward a “greener” future

Last season, all TRS cars were converted to run on an E85 biofuel blended fuel, which produced an immediate reduction in harmful emissions and measurable improvements in mid-range driveability. The cars ran without fault all season, proving the effectiveness of ethanol-based biofuels in motorsport. This year the cars once more head onto the track with the environmentally friendly fuel on board; other categories may well follow suit in future seasons.

New for 2008 are a carbon-fibre inlet manifold that is both lighter and stronger than the aluminium unit it replaces and for the TV viewer a new roll-hoop mounted onboard camera that will give a driver’s eye view of the on-track action.

The 2008-2009 Toyota Racing Series continues with racing on Saturday and Sunday, concluding with the 24-lap Wigram Cup on Sunday afternoon.