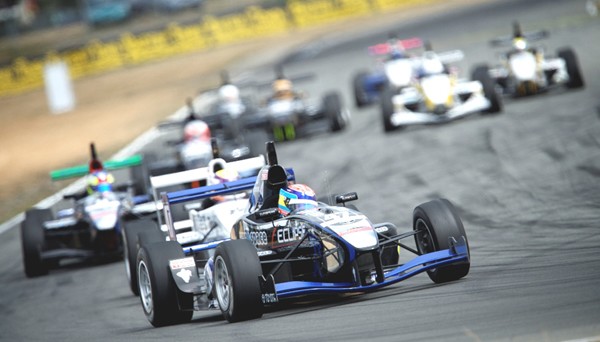 The Cup is the feature trophy at the opening round of the Toyota Racing Series, New Zealand's premier single-seater category.

Starting the 24-lap race on the 3.33 kilometre Ruapuna track from pole position, Pye put in a masterful drive to control the field from the front even when a safety-car period bunched the cars up.

"I was running in clean air at the front and could keep an eye on the bunch behind me. When the safety car closed the field back up I just made sure I was in the right gear and was ready to go when the safety car pulled off the track, and I just went for it," he said.

Pye took the chequered flag with a margin of almost three seconds over second-placed Mitch Cunningham of Auckland, and set a new lap record in the process. Pye's fastest race lap of 1:19.429 was comfortably inside the old mark of 1:19.502 set by Ben Harford in 2007.

Mitch Cunningham, though, is the overall round winner and takes the early points lead in the 2008-2009 Toyota Racing Series with a fourth and two second places giving him 188 points, four points clear of Nathan Antunes in second place with Sam MacNeill third on 162 points.

Third in the Wigram Cup race was Sam MacNeill, who had a clean race after engine worries in free practice and the first race of the weekend. MacNeill also takes third in the series.

Though he was forced to start from the rear of the grid and was thus unable to feature in the Wigram Cup race, Sydney driver Nathan Antunes is second on points for the series. He won the morning's twelve lap race outright, completing a strong opening weekend for Trevor Sheumack's European Technique race team which runs both Antunes and Pye.

He fought through the whole field in the Wigram Cup race and finished fifth, having pressured Michael Burdett into a spin on the final lap that demoted the Hamiltonian to eighth.

In the teams competition, Giles Motorsport 1, which runs Cunningham and Daniel Jilesen, leads the points tally on 336 ahead of Trevor Sheumack’s European Technique on 326 points and John Crawford’s Motorsport Solutions, which runs MacNeill and Alastair Wootten and has 252 points.

The Toyota Racing Series resumes on January 9,10 and 11 at Timaru with the first round of the International Series, three events and nine races on three weekends in the heart of the New Zealand Summer of Motorsport.