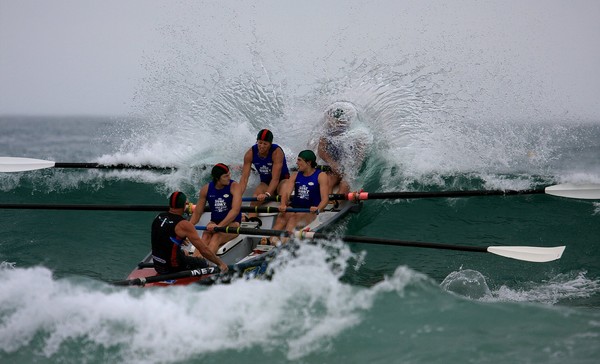 Veteran sweep Paul McVicar returned from a stint in retirement to help his Titahi Bay crew win the second round of the national surf boat series in Whangamata today.

McVicar's presence at the back of the boat was invaluable for the defending series and national champions as the sprint races lived up to their name.

Both men's and women's races were decided on the final gallop up the beach, with Titahi Bay edging the strong Piha boat into second in the final, with Mount Maunganui third.

"Last year we lost here to Red Beach in a run up the beach so it was nice to get one back," McVicar said.
“We had a good start in the final but had a really good race on the way home. We picked up a small swell shortly after the buoys and we just chased and chased and chased.”

McVicar missed the first round of the series and admitted he'll consider completing the season after his crew convinced him to come out of retirement for the Whangamata round.

The women's final was just as dramatic, with Whakatane schoolgirl Carla Linton timing her run expertly as the boats neared the beach, out-sprinting Mt Maunganui's Justine Brennan to the finish line.

Mt Maunganui retain their series lead after dominating the first round in Wellington but Whakatane sent out a strong message they'll be tough in the rest of the series.

"We've got two girls still at school and two of us who are in the veteran category so I think we've still got some improving to do," Whakatane's Tania Archibald explained. "This is a great confidence booster and we're delighted with the win though."

Hosts Whangamata also had success, winning the 2km Dash for Cash around Hauturu Island in the middle of the bay.

The next round of the series is in Piha at the end of January, coinciding with the Day of Giants trans-Tasman competition against a handful of top Australian crews.