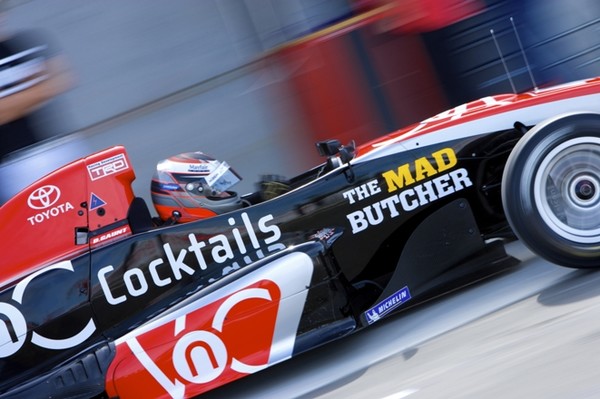 The race marked an historic milestone for New Zealand’s premier
open-wheeler race category and gave Gaunt a much needed boost after he slid
off the track while leading yesterday’s Dan Higgins Trophy race.

The Auckland driver made a perfect start off pole with Earl Bamber beside
him but unable to push through into the lead. Behind them series leader
Mitch Cunningham, local driver Sam MacNeill and Alastair Wootten swept
through in their own battle to hold third.

Team-mates Scott Pye and Alistair Waite touched mid corner, both losing the
front wings from their cars and heading for the pits.

A series of off-track excursions in the first two laps brought out the
safety car, which bunched the field up.

Waite’s crew were able to replace the front wing and nose cone, enabling
him to rejoin, but Pye’s car was pushed into the pit garage.

As the race resumed, Gaunt once more sprinted away with Bamber in hot
pursuit and Cunningham close behind. Fourth was Michael Burdett, with
Alastair Wootten and Sam MacNeill also looking to challenge.

Gaunt said he had watched the battle for second and third in his mirrors,
and aimed to keep his margin over the field while it was resolved.

Once Bamber fought clear of Mitch Cunningham, he set about chasing Gaunt
but the duel ran out of time, Gaunt taking a deserved win. Earl Bamber,
running in “clear air” in second place, set fastest lap of the race on
1:04.626 with a best speed of 168.954 km/h.

Burdett came home fourth, 1.658 seconds behind Cunningham and 1.062 seconds
ahead of Alastair Wootten in fifth. Ken Smith started from the rear of the
grid and finished sixth overall.

Sam MacNeill’s challenge hit problems on the last lap when his gearshift
cable snapped, leaving the Karcher car stuck in a low gear and forcing
MacNeill to cruise home in eighth place.

In the TRS Lites class, Mitchell Evans did not finish, Chris Cox completing
the race with a best lap of 1:09.757.