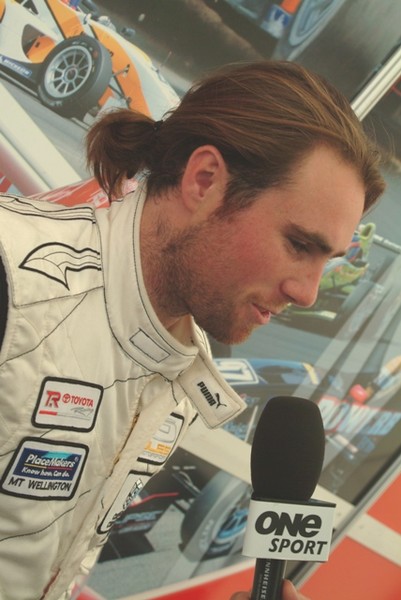 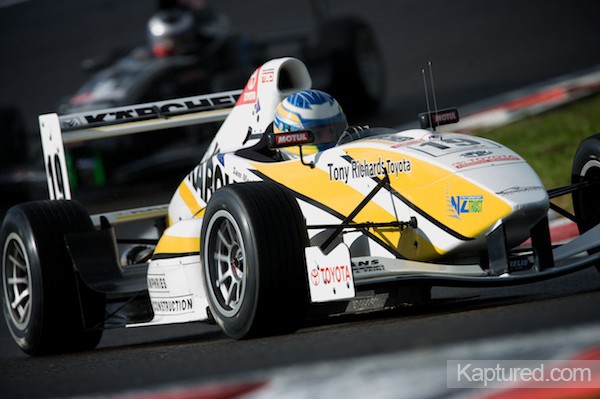 As the premier single-seater racing series heads for the high speed Pukekohe track near Auckland this weekend, Mitch Cunningham will be watching his mirrors closely.

Behind him, close enough to challenge for the title and coming off a sensational New Zealand Grand Prix weekend where he scored a second and a third, is Palmerston North driver Sam MacNeill.

Though Cunningham has been single-minded all season in his pursuit of championship points, the Grand Prix weekend showed how quickly such a strategy can be derailed.

Just a fortnight ago at Manfeild, Cunningham’s charge to the title slowed when he slipped off the track in the Dan Higgins Trophy race, rejoining at the tail of the field as Earl Bamber and Daniel Gaunt – both making one-off appearances in the series – fought on to the finish.

A third in the ten lap sprint race – the 100th TRS race – restored some much-needed points but Cunningham once more slipped down the order in the later stages of the Grand Prix and he slipped off the track, once more falling to the rear of the field.

Sam MacNeill, meanwhile, had only a gearchange cable breakage to mar an otherwise memorable weekend, with second in the Dan Higgins race and third in the Grand Prix.

Earl Bamber came won the Dan Higgins Trophy for a second time; the 100th race and the Grand Prix both fell to two-time TRS champion Daniel Gaunt, who has now won 20 per cent of all TRS races in the history of the series

Once again, the Toyota Racing Series goes undecided into its final round. Just 134 points separate series leader Cunningham on 929 points from second-placed Sam MacNeill on 795, with 75 points available from each race win.

Young Australian driver Scott Pye is third on 737 and looks set to take out the rookie title in his first season driving "wings and slicks" cars. His main rival for that title, Daniel Jilesen, is 155 points behind him on 582 points.

In 2007-2008, the title battle went to the final round – and to the last corner of the final race. Christchurch driver Andy Knight had held off Earl Bamber all season, Bamber setting a strong of lap records and fastest times as he chased Knight.

This year the stage is set for another classic duel, with both Cunningham and MacNeill keen to go racing for the title this weekend.

Following the series finale this weekend, the TRS cars have one more race outing at the Hamilton 400 street race. It will be the second time the premier class has raced on a street circuit.