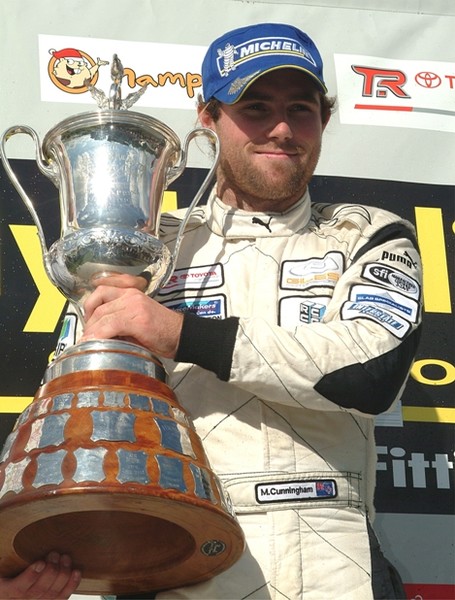 Auckland driver Mitch Cunningham chose a spectacular way to win the 2008-2009 Toyota Racing Series at the final round, held at Pukekohe during the weekend: he took the title despite a high speed spin in one race, then capped his weekend with victory in the 20-lap New Zealand Motor Cup.

Second on Saturday stretched Cunningham’s points lead out to an almost invincible 141 points.

Tempted to chase the Hamilton driver down, Cunningham first made sure enough race distance had elapsed to guarantee he had the championship points he needed.

With three quarters of the distance completed, Cunningham threw caution to the wind and attacked – clawing his way closer to the car of Burdett on the fast and bumpy Pukekohe circuit.

On the last lap of the race, the two were nose to tail at 220 km/h on the front straight and when they entered the blind right hand corner at the end of the straight, Burdett’s car had more grip than Cunningham’s.

The championship leader spun broadside and left the track on the infield in a cloud of tyre smoke and dust, sliding across the grass but managing to get the car stopped before he hit the fencing around the horse track.

The rest of the field streamed past, Cunningham regaining the track and finishing in eighth place.
Though the result was not what he had been expecting, Cunningham said afterward he was happy enough with the 39 points it brought, which put the title out of reach of his key rival, Sam MacNeill.

“I did go out to chase Michael down once I knew I’d done 75 per cent of the laps, because that meant whatever happened I would be classified a finisher – so I just had to have a go! We had a great battle for the later half of the race."

With the championship wrapped up, Cunningham was determined not to hand Michael Burdett three wins.
“I watched some of the other race categories start and it does look like there’s more grip alongside pole than there is for pole, but I was getting hassled by the rest of the drivers about those first two so I wanted to make sure of the third start! Couldn’t let him get away with the whole weekend,” he said.

Off the line, Cunningham and Burdett went into the first corner wheel to wheel, Cunningham’s car just a nose-length ahead, but through the “esses” and onto the back straight Cunningham was pulling away.

The Burdett spun off, almost in the same place as Cunningham in the previous race, handing the 20-lap feature race win to Cunningham. When Burdett returned to the track he did not complete another lap before crashing more heavily.

He slipped wide over the top of the hill – Pukekohe’s “mountain” – and hit the crash barrier, smashing the car’s rear suspension and sliding almost out of control on three wheels down the straight.

That brought out the pace car, though Burdett had managed to control the fishtailing car and get it off the track safely out of the way. The field bunched up once more but when the pace car left the track and racing resumed it was business as usual for Cunningham, whose car carried more speed onto the back straight than his rivals and enabled him to simply drive away from the field.

Cunningham ran out the winner, adding fastest lap and the historic New Zealand Motor Cup to his weekend trophy haul.

The Motor Cup, usually reserved for the New Zealand Grand Prix when it is held in the Auckland area, carries the names of some of the most famous racers of past generations – Stirling Moss, Jack Brabham, Bruce McLaren and more have won the coveted trophy in the past.

Now it will carry the name of the newest TRS champion as well.

With no firm plans for his next step, Mitch Cunningham says he would “love” a chance to come back and add his name to the other big TRS trophies: the Dan Higgins Trophy and Grand Prix Cup, both offered to winners of races at Manfeild, and the Lady Wigram Trophy, last offered in the TRS Championship in the 2007-2008 season.

The Toyota Racing Series cars will next take to the track for the non-championship Hamilton 400 street race in April.