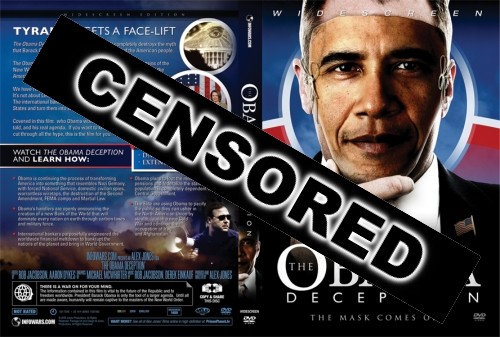 A site that brands itself as a kind of ‘You Tube for Christians’ - Tangle.com, which was formally known as Godtube.com, has censored Alex Jones’ new film The Obama Deception after claiming the documentary contained “slander and libel”.

One of our readers tried to upload The Obama Deception to the Tangle website in four parts, but two of the sections never made it and the reader was subsequently contacted by Caitlin Reynolds, ‘Community Care’ administrator for Tangle.

“Hello and thank you for using tangle!,” stated the e mail. “Your video contains slander and liable (sic). We cannot allow this content on our site with out documented proof of the accusations. Please refer to our Terms of Use for additional information. http://www.tangle.com/support/legal Please let us know if you have any other questions or concerns!”

Firstly, we would advise Tangle.com to try and learn to spell the word “libel” before they attempt to interpret it.

Secondly, Obama’s lies are exhaustively documented at every step of the way throughout the film. The content of the documentary itself disproves any claim of “libel” or “slander”.

Naturally, Tangle.com failed to cite a single example of defamation in the film but immediately banned it anyway, which is even more bizarre considering the fact that Obama has already put into action policies that should abhor Christians, some of which are touched upon in the film.

Perhaps Tangle.com is run by the same kind of phony ‘Christians’ as those that staff the Assembly of God church in Ohio, who recently released a pamphlet encouraging their congregation to all but obey Obama and not criticize his policies, citing a perversion of Romans 13.

This is the second example of large networking websites attempting to censor the Obama Deception within a week of its release.

Yesterday, we featured a story about how a user had his account terminated by Facebook for merely posting links to The Obama Deception video.

You can watch The Obama Deception for free at You Tube or subscribe to prison planet.tv and see the movie in high quality along with a plethora of other videos.