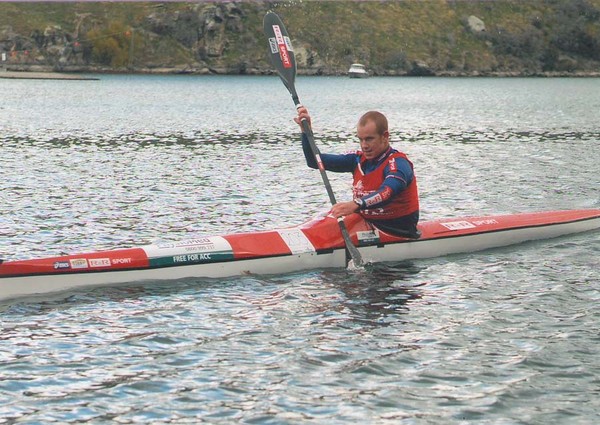 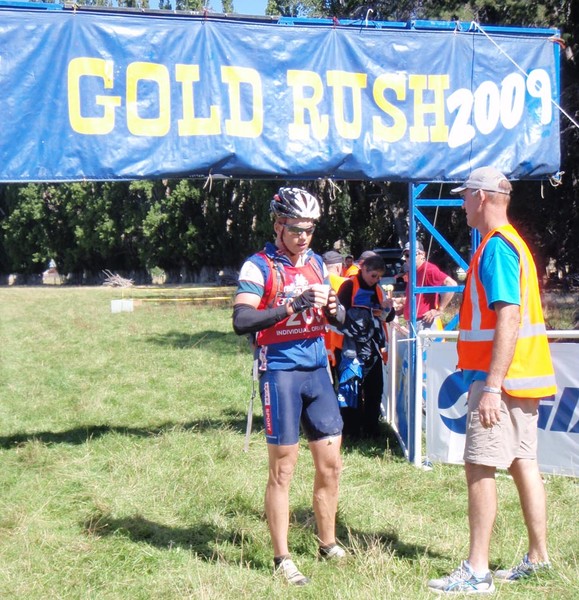 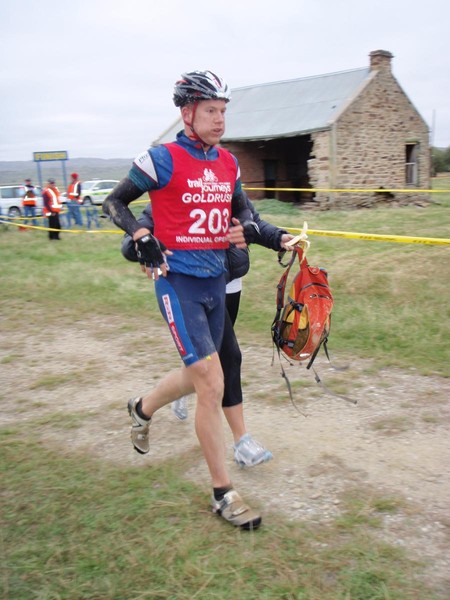 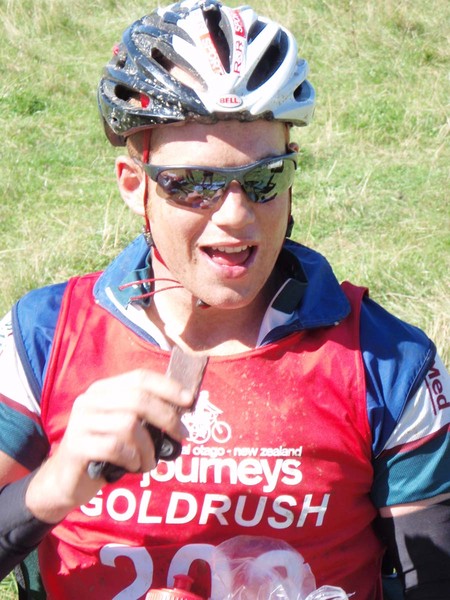 Without going into excessive detail, the Goldrush is a long, tough multisport race. 375km, raced over three days, the event requires teams and individuals to kayak, mountain bike, run and road cycle for between 5 ½ to 9 hours a day. This year 370 entrants would take on the challenge beginning on Saturday 21st March in Alexandra, and finishing in the same Central Otago Township on the Monday.

My goal was quite simple. To win. I had never won a multisport race twice, and I was very keen to make the Goldrush my first for this achievement. So when the race was started with a 1.6km run to the kayaks awaiting competitors on the banks of the Clutha River, I turned it into a sprint. This was in part to test my delicate knee that had fallen apart on me during the Goat Pass run in the Coast 2 Coast Longest Day 5 weeks earlier. But it was also to send a message to the other individual competitors that I was keen to push a high intensity right from the start, the challenge then would be holding it.

The 30km paddle to the Roxburgh Dam was a great adventure as a strong Southerly wind had the lake looking more like an open ocean with on-coming white capping waves making for some interesting moments for some. I managed to post the fastest individual split for this stage and was quickly onto my mountain bike enjoying what was now a tail wind as I climbed up the Knobby range towards Little Valley. I held off a strong cycle challenge from Matty Graham and led going into the final 18km run. I enjoyed what were still cool conditions and a tail wind and felt good on the run as I had all day. I managed to be the first individual (2nd overall) to the Upper Manorburn finish line, a wonderful setting for the camp between days 1 and 2. I was pleased to have established an early lead of about 12 minutes over fellow competitor and close friend Matty Graham.

Up at sparrows fart the next morning and we were again treated to very cool conditions. My wonderful support crew member Sally was left to deal with my frozen tent as I warmed my belly with spaghetti etc. Day 2 started with a mountain bike and individual competitor Gav Mason (another friend and training partner) was quick to make his intentions known as he absolutely flew through the first few kilometres. It was quite nice to have someone to chase first thing in the morning as it helped get the blood flowing and start to warm the stiff leg muscles. The infamous climb to the top of Serpentine was as slow and arduous as always. Team PhysioMed cyclist Marcus Roy was reported to have ridden about 80% of this section. Quite an incredible feat as I would estimate my figure to be more like 10%!

Once at the top amongst the frozen tussocks and clumps of snow I managed to hook onto Marcus as he flew by and hold on for dear life as he pulled me all the way through to the Poolburn transition. My feet were frozen numb after the 52km mountain bike and I was soon on my Giant Trinity time trial bike lapping it out with Marcus Roy’s team mate and nationally respected kayaker Ian Huntsman. We rode a sub-40minute 24km and before I knew it I was running the Rail Trail bound for Lauder 15km away. I couldn’t feel my feet for the first 3km and when they finally warmed up I could feel a very sore right foot throbbing, the result of a crash up on the tops earlier that morning. My lead was now quite healthy again so I enjoyed stretching out the body along the relatively flat run before the final stage of the day – arguably the toughest of the race.

Thompson’s Gorge is the 58km route connecting competitors from Lauder to Tarras. This is an honest 58km with some healthy climbs, and I was quite content to see my ride through this stage take 2 ½ hours. That was until I saw Marcus had ridden through in less than 2 hours! Tarras is another great place to spend a night and I passed up heading home to Wanaka for the night, opting to instead enjoy the atmosphere of this stunning race and sample the always impressive meal cooked up by the locals. My favourite dish? The rabbit pie of course.

My lead was now 27 minutes over Matty and I was 3rd overall when comparing against the teams. I was very keen to race as fast as I could on the final day and see if I could finish with a top 3 overall time across all categories.

The chilliness of the early morning air on day 3 was quickly wiped from my mind as soon as we were sent off on a 42km road cycle to Albert Town. I was keen to start fast again and was thankful to notice early that Gav Mason and Matty Graham had similar intentions. We quickly dropped most of the open men and had caught the veterans in what seemed like no time at all. On one of the hills about half way into the ride Gav rode hard and encouraged those who were brave enough to follow suit. This worked well as we were soon in a group of 6, two vets and 4 open men. 6 was a perfect sized group for a fast final 30 minutes to the Albert Town, avoiding the potential clutter at transition due to what could have been a much larger bunch if not for our aggressive riding tactics.

Onto the Clutha river and I was finding it very hard to see further than 5 metres ahead due to the mist lifting from the beautiful waters of the river combined with the early-morning sun shining brightly. Within 15 minutes I had taken the lead back from Matty and I paddled hard to stay in front of any team competitors that would be closing in after starting a few minutes after the individuals. The Clutha is always a pleasure to paddle and the day was warming into a real beauty. I managed to get off the water first and was very pleased to look back and see a team rider about 100m behind as we ran 3km up to the awaiting bikes. I got on my bike and decided to just put my head down and start riding until the team cyclist caught me. Within a few kilometres Marcus Roy from Team PhysioMed rode up alongside me and I gratefully slipped into a draft position directly behind him. The 50km cycle to Clyde is always tough as the three days of racing starts to really take its toll on the legs. Marcus was having trouble getting comfortable on his bike so we starting to share the workload a bit more (although he was still doing a lot more work than me!).

Sally and Richard, who had been my support crew all weekend, were flawless at every transition, and the final one into the 13km run to the finish was no exception. Within seconds I was off my bike, into my bright yellow Asics DS Racer shoes, and settling into a good rhythm which I hoped would last all the way to the finish line about 52 minutes later. It is another typically scenic Goldrush stage that takes competitors along the banks of the Clutha from Clyde into Alexandra. Running under the shade of the Willows along the windy single track I was not aware of how much the day had heated up until I popped out at the Alexandra Bridge and became immediately exposed to the direct heat of the sun. Thankfully it was not far to go from here and 17 hours and 37 minutes of racing later, I crossed the finish line at Molyneux Park as the first individual by 48 minutes and the 2nd competitor across all categories in the 2009 Goldrush.

I have to thank Sally and Richard for sacrificing a long weekend to help get me through. It really was the perfect race and the fact I experienced basically no problems with gear, nutrition, unnecessary fatigue etc has everything to do with these two magnificent human beings.

I also wish to thank my faithful sponsors for keeping me motivated to continue to perform well in response to the belief and on-going support they all show me. Thank you all!