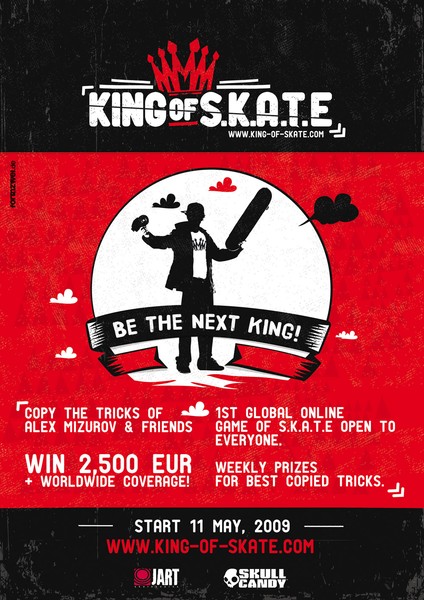 Skateboarding competition King of S.K.A.T.E begins this week with the first trick challenge, a double flip, being issued to skateboarders around the world.

The global competition, this year open to New Zealand entries, challenges skateboarders to copy a trick performed by one of the “Round Table of Skateboarding” each week. Entrants must video their attempt within seven days and upload it to www.king-of-skate.com where the tricks will be judged and a winner selected for the best performed trick.

New Zealand site infoskate.co.nz will promote the entries from New Zealand and allows competitors to sign up to add their own videos, images and comments about tricks from the competition or general skateboarding in New Zealand.

It’s all about skills, prestige and of course a whole lot of fun. Europe's skateboard Wunderkind and legends Chris Cole and Alex Mizurov will show competitors top-class tricks to copy. For each week that a competitor cannot land a trick they receive a capital letter (S, K, A, T, E). If that happens to a competitor five times and they complete the word S.K.A.T.E, they are dropped out of the competition.The winner of the competition will be determined in a decisive final and will receive worldwide media coverage.

Last years competition saw nearly a thousand competitors from 12 nations fighting for the title 'King of SKATE' and ended in spectacular fashion with two competitors battling to land the best trick 'bombardment'.
infoskate.co.nz invites all Kiwi skateboarders, and skateboarding labels to publish their own news, photos and event details on the site for free. Any New Zealand competitor in the King of S.K.A.T.E will be featured on infoskate.co.nz and on the wider infonews.co.nz site during the competition.

About infoskate.co.nz
Infoskate.co.nz is the official New Zealand media partner for King of S.K.A.T.E and is part of infonews.co.nz which is a citizen journalism website for local news in New Zealand that allows any member of the community to promote themselves, publish news, photos, links and event details while also providing a forum for opinions, messages and interaction.

infoskate.co.nz invites all skateboarders, and skateboarding labels to publish their own news, photos and event details on the site for free.