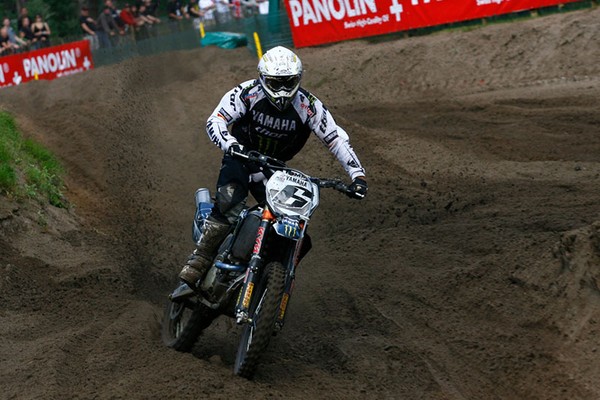 The penultimate round of the FIM Motocross world championship has seen Yamaha Monster Energy rider, Josh Coppins, return to the podium after two impressive and strong rides in the treacherous Lierop sand over the weekend.

With over 18.000 enthusiastic spectators turning out for the event under sunny skies, Coppins looked set for the Sunday program after putting in a great comeback ride in his Saturday qualification race after going down in turn two. ‘Lizzard’ recovered to 11th spot giving him a reasonable gate pick for the two 35 minute + 2 lap races.

As the gate dropped for the first moto, Coppins positioned himself in the top ten and took his time in making his way through the pack. As the riders settled into position the New Zealander’s experience and stamina would see him pick off riders, one for one, as he progressed up the standings. Leaving it a little too late, Coppins’ charge took him to the back wheels of Leok and Philippaerts but he ran out of time to make a move for a podium spot and had to settle for fourth.

Feeling physically and mentally strong for the second moto, Coppins was determined to make his mark and grabbed a good start. A slow first lap saw him loose vital positions but he soon settled into his race rythym and started his assault on the pack but then a small slip up lost him some time. With ten minutes left on the clock, Coppins remarkably moved into second spot but then crashed a lap later allowing Belgian, Clement Desalle to sneak by. The relentless Kiwi quickly rejoined the race and within one lap he re-passed Desalle and set his sights on Ken Dedycker who was on cruise control. Crossing the finish line with De Dycker just ahead, Coppins secured his third podium of the season.

“Lierop is so unpredictable however I felt good today and proved that I still have it in me especially in these tough conditions. Ken was undoubtedly the best rider today but I still would have liked to have pushed him in the motos. I enjoy riding in Lierop because it separates the men from the boys and it rewards you for the hard work put in over the winter months. There is not much time to rest after this weekend as I have a Belgian championship next and then we fly to Brazil for the last round.” explained a content Coppins.

The 15th and final round of the series will take place in Canelinha, Brazil on the 12-13th September.