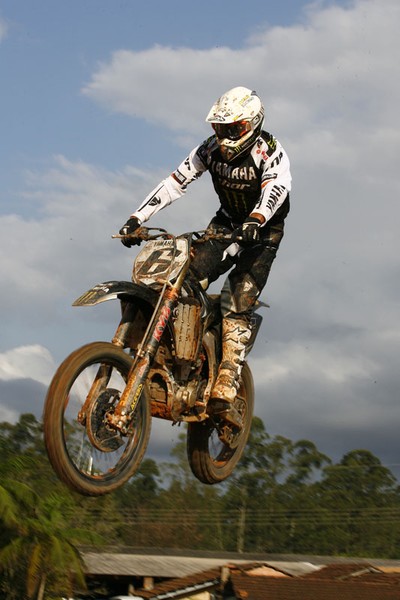 Coppins puts in a strong show at Brazilian MX GP

The fifteenth and final round of the MX1 Motocross World championships held in Canelinha, Brazil has seen a positive end to Josh Coppins’s 2009 MX GP campaign. The Yamaha Monster Energy rider, posted a 5-3 score to secure 4th overall for the GP and 6th in the championship standings.

Saturday’s qualifying program was postponed to Sunday morning due to constant rainfall that plagued the region leading up to the event. Thankfully, clear skies dawned for race-day with perfect track conditions and a sellout crowd all the makings for a great days racing.

Having qualified 7th, Coppins had a good pick of the gate but got bunched in at the start going into the sharp right handed first turn in race 1. Emerging in 6th as riders jostled for positions on the opening lap, Coppins seemed unsettled but soon the experienced Kiwi found his rhythm and his superior fitness would see him relegate newly crowned World champion, Antonio Cairoli to 6th position by the end of the moto to finish 5th.

A better start in race 2 would see Coppins in a podium spot however he lost some valuable positions in the first five minutes of the moto. Max Nagl was first on the hit list as Coppins re-started his assault and moved up the standings. He then disposed of Ken De Dycker and team-mate Philippaerts before focusing his sights on first moto winner, Clement Desalle. Coppins reeled the Belgian in with five minutes to go and tried everything possible to make a move however Desalle remained a road block and did not give away any opportunities to Coppins with positions unchanged at the chequered flag.

“I really enjoyed the track this weekend and I must commend the organizers and Youthstream for doing a great job and turning the track around after such bad weather. My starts were ok in both motos but I battled the first five minutes in the second moto and then finally found my rhythm to fight back. I did all I could to pass Desalle on the last lap but he never bottled so I was a little bit disappointed to lose out on the overall podium. It’s been a great 3 years with the Yamaha Monster Energy team – I have been riding GP’s for 14 years now and today I proved that I still have it in me to fight for podiums so I’m quite pumped to end off the season on a strong note” commented the thirty-two year old New Zealander.

Coppins now heads to Italy where he will captain Team New Zealand in the 63rd edition of the Motocross of Nations to be held in Franciacorta, Italy, on the 3-4 October.