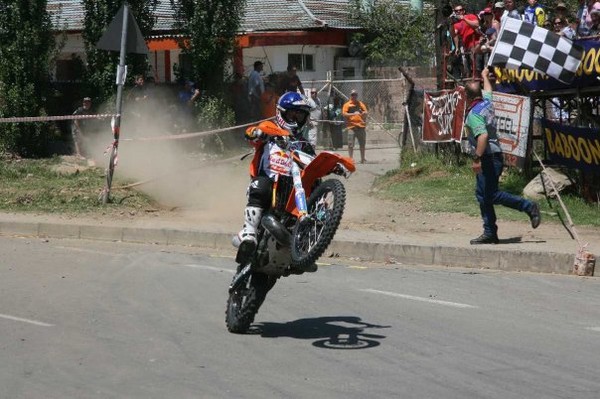 The 2009  Roof of Africa Hard Enduro saw a tough battle for the win with Red Bull's New Zealand rider Chris Birch taking the flag. The New Zealander successfully defended his 2008 title riding a KTM 300. He was joined on the podium by Wellington's Rory Mead, second on his Yamaha, and  Germany's Andrias Lettenbichler  (BMW) in third. While Birch was over two hours ahead of second place, Lettenbichler  was only 12 seconds behind Mead.

Having won the race by an incredible 49 minutes last year, Birch returned with the knowledge that he was under pressure to defend his title, but was confident that he was well prepared to do so. However, he managed to outride second placed Mead by a massive 2 hours and 14 minutes, placing him way up in a class of his own in the 43 year old history of the Roof of Africa

Chris Birch commented after the finish: "It was really tough, I am not as tired as yesterday, but I worked hard today. All I could do when I re-started (after a wrong turn) was to focus and ride my absolute best, but I am very happy to take the trophy home this year."

"This is by far the toughest race I have ever done" commented New Zealand’s Rory Mead, who finished second overall in his maiden race on a 250cc Yamaha, behind his countryman and defending champion Chris Birch.

After the previous day's 10-hour session of extreme enduro riding, front running competitors had another almost 10-hour day on a shortened route starting at 6am on the final day, with the first man home at 3:40.pm

Andreas Lettenbichler (Germany) rode exceptionally well and left many people in awe with his astounding skill and the way he mastered mountain passes where others really struggled. After a technical problem he finished in 3rd place only 12 seconds behind NZ's Rory Mead.

Birch was the lead rider and ran into trouble on Day 2, which featured a shortened route. A mis-labeled intersection sent Birch kilometres in the wrong direction. Confusing him so badly that hehad to retrace his tracks and restart lower down the field.

BMW’s Andreas Lettenbichler, the winner of this year’s Red Bull Romaniacs, was having an excellent rally before a technical issue with his BMW forced him to the side of the road on the final day, allowing Birch to overtake

Indicating just how exceptionally difficult the race really was, only 23 competitors of the 102 starters doing the full event, finished the race, with a number of riders spending Friday night out in the mountains, accommodated by the local communities in their villages. Only 4 riders made it to the finish in the Seniors, Masters and Silver Classes of the 117 competitors who entered.