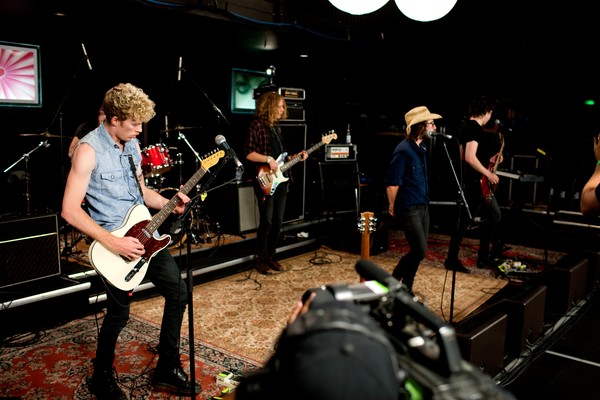 A band playing at the Non-Stop Gig CREDIT: C4 and Telecom

C4 and Telecom broke new ground on Sunday with New Zealand’s first online-only concert. More than 50 of the country’s top musicians performed for 12 hours non-stop covering a wide variety of genres.
Thousands of viewers across New Zealand enjoyed a feast of New Zealand’s top acts which was kicked off by award winning group “Midnight Youth”. The formidable line up catered for all tastes and viewers were treated to some moments of musical magic throughout the gig. A number of bands including the Feelers, Pluto and Autozamm performed brand new material and Jason Kerrison introduced his new music project Control Freak. Other artists performing included J Williams, Computers Want Me Dead, Motocade, Ivy Lies, Pistol Youth, The Naked & Famous, PNC, David Dallas, The Earlybirds, Artisan Guns, Dane Rumble, Goodnight Nurse and Erakah.

The Non-Stop Gig was a New Zealand first - never before has a gig been live streamed for such a duration over the net. Despite the gig being the first of its kind in New Zealand, C4 viewers appeared to embrace the concept readily. In total 6,370 unique browsers tuned into C4's site during the 12 hour period with some viewers claiming to have watched the entire 12 hours!

Live streaming in New Zealand is still quite a new concept and understandably many visitors were surprised at how fast and clear the transmission was.

Hosting the gig online meant viewers were able to engage in live chat with other music fans and C4 hosts and artists throughout the show. More than 20,000 texts were received from viewers - and these were run beneath the live stream - along with commentary through social media networks and on the C4 website itself.

Bands were enthusiastic about the unique experience.

Emla Palmer from Ivy Lies said “It was definitely a new experience for us, it was lots of fun! It is a really innovative idea and awesome because the music is able to have such a wide reach.”

“It was pretty cool knowing that people were actually tuning in to watch us live online; instead of them coming out to see us play, we sorta went to them! I also thought it was kinda cool for a band that started online to be playing online,” said Brad Carter of Pistol Youth.

C4’s Marketing Director Amanda Wilson commented that the Non-Stop Gig delivered an exciting and unique musical experience. “Online gigs certainly won’t replace live or televised gigs but they definitely offer an entertainment alternative to music lovers around New Zealand and the world. We’re thrilled to have had the opportunity to engage in this type of project with our viewers, it was great to try something new.”