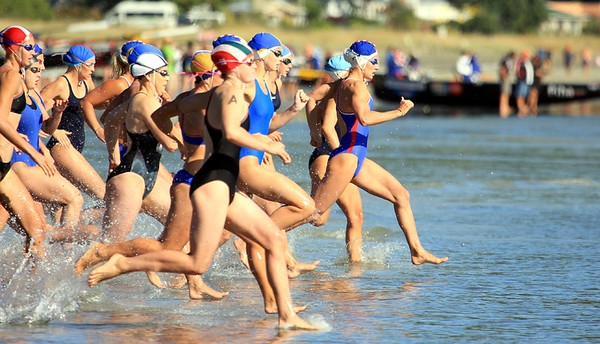 Harris has only been in the sport for just over a year and his inexperience showed as his Fitzroy teammate and three-time winner Cracroft-Wilson nursed him through the early rounds.

But when it came down to just the pair of them, Harris pounced.

“Croffy looked after me all the way through, which was great of him, and I just got a shoulder in front of him on the dive,” Harris said. “I never really liked sprinting before but I might have to get into the gym, do some proper training and give flags a bit of a nudge now.”

Experienced campaigners Blair Dunn, James Ryan and Brad Wilson paired with 15-year-old Danny Kayes to clinche another gold for Papamoa, with the Bay of Plenty club continuing an impressive rise up the overall standings.

New Plymouth’s efforts were again led by New Zealand captain Glenn Anderson, who combined with Dylan Dunlop-Barrett to win the open tube rescue title, with the pair also anchoring their club to second in the surf teams race.

Mount Maunganui’s title charge was helped by more success in the under-16 and under-19 agegroups, along with a memorable board relay win by Nathan Henderson, Andrew Newton and David Graham.