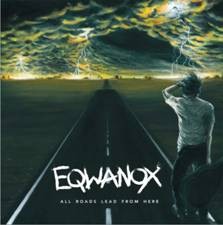 Eqwanox proudly announce the physical release of their debut album All Roads Lead From Here on Monday 5th April, distributed through Border Music.

All Roads Lead From Here was recorded at Number 8 Wire Recording Studio by Chazz Rabble and at Dudley Studios by Captain Hook. The album features 10 anthem-like rock tracks written and recorded while the band was still in their teens.

The album’s leading single ‘21st Story’ is an epic party sing-a-long with huge guitars and an even bigger chorus. It has been made available for free online download on MySpace and hit the radio airwaves earlier this year.

Eqwanox formed in Te Awamutu (Home of the Finn Brothers) in 2004 while still at high school. Since then, they have built up a diverse fan base, mainly due to their strong live shows which is something they pride themselves on.

They have performed on some of New Zealand’s largest stages, playing with a number of their music idols including Seether and Billy Corgan (Smashing Pumpkins). Eqwanox have also cut their teeth playing with other renowned local bands such as The Bleeders, Midnight Youth, Autozamm and The Rabble.

Eqwanox have been an annual Smokefree Rockquest Guest Band since 2006, and in 2009 they made the National Final of the World Battle Of The Bands competition; placed 1st in the Axces Bar Rattle the Room competition; made the finals of KFC’s NZ Music Month ‘Sounds From Your Hometown’ competition; and performed live for JUICE TV’s The JD Set.

Eqwanox are currently on the road supporting iconic Kiwi band Dragon, and will be embarking on a nationwide headlining tour in the coming months.