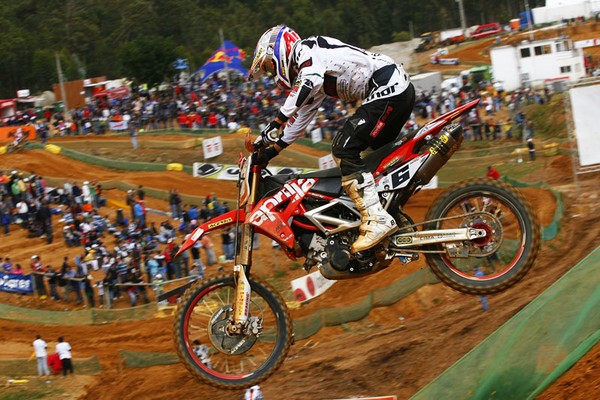 The 4th round of the FIM Motocross world championships saw mixed weather conditions play a roll in Agueda Portugal over the weekend. Factory Aprilia racer Josh Coppins, made the most of the tricky track conditions after rainfall on Saturday threatened to turn the well groomed Agueda circuit into a quagmire.

A derailed chain forced the Kiwi out of the 20 min qualifying race on Saturday, however as mid morning sunshine dried the track on Sunday, Coppins was determined to make the most of his wide starting position. A faulty start gate had riders on edge as the first moto start was red flagged with officials doing their best to repair the problem. The restart went smoothly however ‘Lizzard’ was caught in the second half of the pack as he tried to jockey for positions. Battling to find his true race rhythm, Coppins broke into the top 20 and picked off a few positions as the clock ticked by. 17th place was the best that the Kiwi could produce in track conditions that were difficult to pass on.

With clouds clearing and track conditions drying out fast, the second moto would make for some exciting racing. ‘Lizzard’ once again had his work cut out with his wide starting gate, however he put in some aggressive opening laps and pushed through to 10th place around the halfway mark. A good battle with Belgian, Steve Ramon and Frenchman, Sebastien Pourcel would see the trio trading positions as they caught a tiring Davide Guarneri with a lap to go. Pourcel got by the Italian however Coppins ran out of time but managed to keep Ramon at bay to cross the line in 11th.

“Today was always going to be difficult from where I was placed on the start gate” explained Coppins. “The first moto was not good at all and I just couldn’t seem to get going and battled the entire moto. The second moto was much better for me and I really enjoyed the rough lines and tricky sections. I seemed to flow better and was pleased with my speed and result.”

Coppins heads to Bellpuig, Spain next weekend for round 5 in the 15 round series.