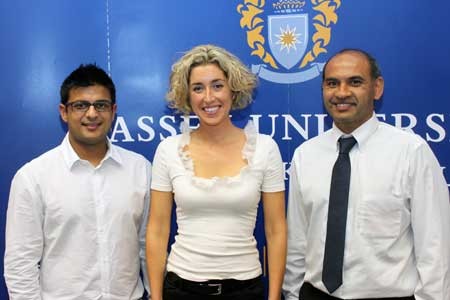 A presentation on her research into loneliness won an Albany campus psychology student the inaugural Three-Minute Thesis competition yesterday.

Isabelle Miclette, whose PhD thesis is called The Cost of Loneliness, triumphed over 10 other hopefuls at the final of the competition held in the Japan Lecture Theatre at the Manawatu Campus.

The event, organised by the Graduate Research School, promotes the development of academic and research communication skills.

Each competitor had three minutes in which to get the audience as excited about their research as they are. Competitors are judged on communication style, whether the presentation helped the audience understand the research, and their engagement with the audience.

Dean of the Graduate Research School Professor Margaret Tennant said the competition was a fun way to reflect upon some of the serious aspects of postgraduate study. "Modern PhD students are expected to have wide-ranging skills," she said. "They are expected to have communication, budgeting, career planning and academic integrity skills. This competition recognises that, but it also helps them to give clarity to their study and gain confidence."