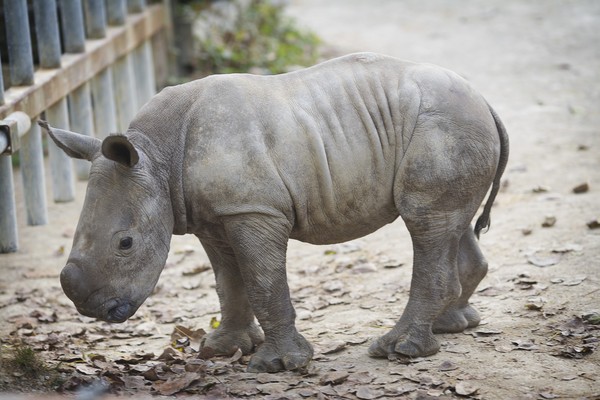 Classic Hits’ Bunting in the Morning announcer Mark Bunting launched a campaign to name the rhino calf Ubuntu earlier this month after Hamilton Zoo called for name suggestions for its new white rhino calf, which was born at the facility on 12 March.

As revealed in a newspaper article in April, until an official name was decided on some zoo staff began affectionately referring to the calf as Bunty, due to his boisterous antics.

Flattered by the early nickname given to the baby rhinoceros, Mark Bunting implored his listeners to suggest the African name ‘Ubuntu’ at www.hamiltonzoo.co.nz, a word common in Bantu languages in southern Africa, which describes unity and cohesion.

Hamilton Zoo acting director Samantha Kudeweh said over 1500 name suggestions were received during the naming competition, many of which put forward the name Ubuntu.

“While there were a lot of good name suggestions, Mark Bunting’s Ubuntu Campaign clearly gained a lot of public support and zoo staff really liked the philosophy behind the name Ubuntu – so the decision has been made to adopt it as the calf’s official name,” she said.

Everyone who submitted the name Ubuntu in the naming competition will go in the draw to win an Eye2Eye encounter with the rhinos at Hamilton Zoo (valued at $400). The winner will be drawn during a christening for Ubuntu, which will be held at the zoo this Saturday, 5 June from 9am-10am and hosted by Mark Bunting. The winner must be present at the christening to claim the prize.

Mark Bunting said he is overjoyed by the decision to christen the rhino ‘Ubuntu’.

‘We’re thrilled for so many reasons. Primarily for wee Bunty who will now not have that identity crisis later in life, secondly for the public of Waikato who embraced the idea of ‘Ubuntu’, thirdly for Nelson Mandala and Bishop Desmond Tutu who will be getting a lovely letter of acknowledgement from our producer, and fourthly for our show which now has a mascot.

“We can’t wait for the naming party/baby shower this weekend. Ladies all over the Waikato are knitting large booties as we speak, gowns are being made, and there is a lot to do, but by hokey we’ll get there!

Those attending the christening are encouraged to bring along presents of lucerne hay or make a donation towards a new rhino shelter which is planned at the facility.

In celebration of Ubuntu’s christening this Saturday, one child per paying adult will gain free entry to Hamilton Zoo throughout the day.