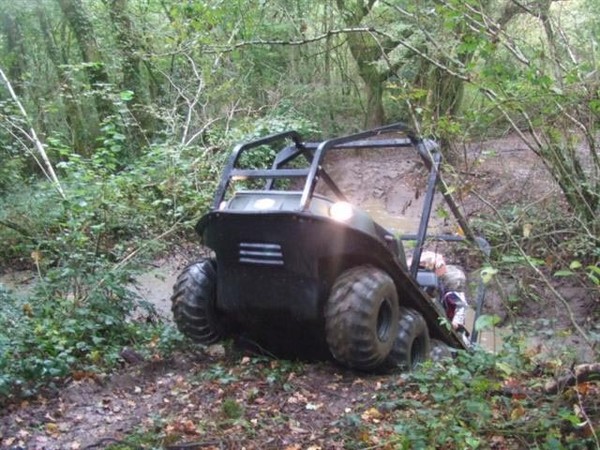 Ride the Taniwha CREDIT: Over The Top Adventures Limited

“I was standing in this creek bed and It just swept past me and climbed up this slippery clay bank and dissapeared over the top of that hill” Stuart Guy, tour guide for Over The Top Adventures, tells us with that smile you only see when you know that someone is having you on.

"Hauraki Maori have a legend that the warrior Tamure fought and tamed a taniwha called Kaiwhare and since then the taniwha of the Hauraki area have shown benevolance toward visitors by protecting them in areas of wilderness and in dangerous rivers and storm swollen streams".

Stuart went on to tell us more about his new beast, The Taniwha.
“They are a specially designed and built Eco Tourism ATV vehicle that can seat up to 7 passengers and with 8 wheel drive it will go practically anywhere a person can walk or climb”, in fact better than that, he tells us, “It's also amphibious and will travel at up to 5kph across rivers and lakes” the eight big low pressure tyres will leave hardly a twig out of place as it takes groups of tourists and school children into the old gold mining area for an interesting and informative 2 hour tour.

Up until now the gold mining areas that Over The Top Adventures have access to have only been visited by their customers who are proficient riding on their fleet of high powered KTM and Kawasaki enduro bikes. “The terrain is challanging but that is what keeps the place pristine, visitors apart from us are very rare up here” he says.
The 2 new Taniwha machines will mean that school groups,older people and families, even disabled people will be able to get an insight into the conditions that the pioneer goldminers lived and worked in. The tours run seven days and are booked through the companies website www.overthetopadventures.co.nz

The Taniwha has been tamed and now takes tourists families and school groups on a 2 hour Taniwha's Gold Discovery tour. To an area riddled with shafts and tunnels, tracks and bogs streams and bluffs. The tour visits several old mining sites and our two driver/guides shared stories of the pioneer days. They pulled old maps and photos from hiding holes in the tunnel walls where miners once stored candles and their 'crib' lunch boxes. They told us stories of boom and bust,  miners strikes and even pickled thumbs!- Gross but true. It appears that if a miner was injured and unable to work again he was given a years salary- enough then, to buy a house! - all he had to do was chop off a digit! Luckily our tour guide told us this gem after we had eaten lunch....

We were led into one of the 'stopes' – a huge hollowed out section of the mine where the gold deposits had been. Our torches would not illuminate the upper parts which were about 30m above us. The guide had us turn off our torches to marvel at the soft blue-green mantle up there from thousands of glow worms
and told us that its not actually the worm that glows- its their poos!

Some of the tunnels were large enough to pass through in the Taniwha and we travelled from one side of the hill to the other in minutes with headlights blazing into the darkness and then burst out into the sunshine in a shower of water spray. Then we dropped off the main track to descend to the tumbling stream below, where the relics of huge waterwheels lay that had been used to power the battery of stampers used to process the gold that had been mined from the hills above.
On the way back down from the mines our guides took the two Taniwha vehicles into a less environmentally important area and threw the beasts into a ten minute spinning and climbing frenzy- If you have been on a river jet boat ride you will have some idea of how manoverable these things are, we were lost momenterally in clouds of 'Taniwha breath' as we spun round and round in the mud and the hot exhaust was sprayed with water. At times the two beasts were piroetting round each other like divas and we laughed at the faces of our mates in the other vehicle. Our drivers then gave each other 'the nod' and threw the two beasts side by side over a blind edge and down a long slippery clay hill. The girls in the back screamed like - well, girls...
And we found ourselves back at the carpark where we were given a CD of the photos and the dvd video of our ride. Awesome value for $120.00each
Two hours in one of these things is so much fun your face will hurt for the rest of the day- we found it a great introduction to the history of mining in the area too.