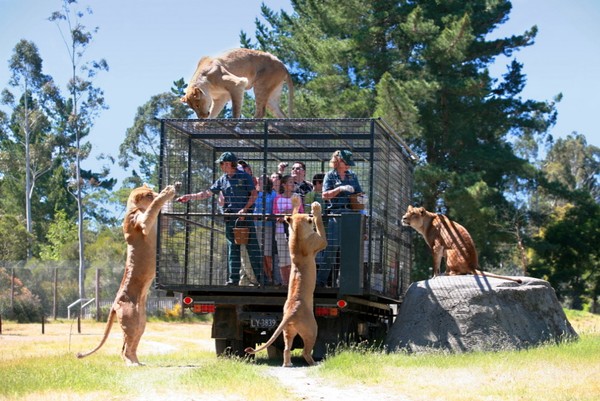 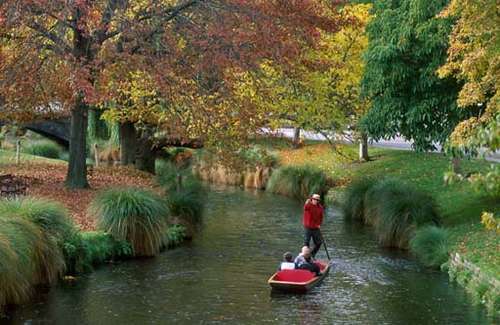 The ambling Avon River flickers and glistens like an Evelyn Page painting.

Dazzling daffodils will soon be springing up on the banks of the Avon, along the avenues and around Hagley Park bringing a burst of spring and sunlight after a long winter. Christchurch in New Zealand is so romantic anytime.

We are laying back on comfy cushions, sipping Framingham’s classic riesling as we are punted down the river. I shut my eyes and imagine peaceful strains of Norah Jones or even local singer Naomi Ferguson floating in the air.

Chrissy and I disembark our boat and stroll along Worcester Boulevard to the Arts Centre. This is almost at the heart of the city; a bit like the Left Bank in Paris. We fossick among the stalls and wander up through atom-splitter Lord Ernest Rutherford’s den, a gothic building which was once the city’s university.

Further on to Christchurch Cathedral and the Square, the epi-centre of the flattest large city in New Zealand. This is NZ’s garden city and its charm and appeal is ever increasing. It’s not a beach city, or part-central city; it’s a place of history to love and treasure, especially its dwindling architectural heritage. Developers have ruined and destroyed more grand old homes than any other place in NZ.

We amble back to our luxury oasis, Beaufort House in Latimer Square, where we are staying in heaven for two nights. Our charming hosts Sharon Rees-Thomas and Noel McGuigan give us the history of the 94-year-old arts and craft building of Beaufort House. Chrissy and I are cast back in time from the moment we step inside. It’s warm, classy, cosy and peaceful but so close to town.

Sharon and Noel have paid a small fortune kitting out all the rooms with period furniture and stunning paintings. The piece on the reception wall of women out celebrating by Hayley Brown and another of a finely dressed woman in blue by Auckland’s Caren Thompson remain etched in our minds forever. Beaufort House is one of the best small destination havens in New Zealand. It will be greatly sought-after for the whole-of-house during the Rugby World Cup event next year because of its location and quality.

After a chat at the Edwardian bar with Noel and Sharon, we retire for the night and sleep like logs. For breakfast in the big dining room, muesli, creamy Puhoi Valley yoghurt, mango, melon, pineapple, strawberries and passion fruit are washed down with a cup of tea and a piece of wholemeal toast.

We ponder our moves for the day: try out the massive army tanks at McLeans Island; a bike ride over the Port Hills; a train trip through the Southern Alps? Nope, we head to Orana Wildlife Park and say hello to Eco, their two month old rhino calf. Eco is just the second Rhino ever born at Orana. His arrival is a significant as the reproductive rate of captive born rhinos is very low.

We see the lions, hand feed the giraffes and look at the cheetahs then Chrissy says it’s time to go shopping. She has as real eye for recycled fashion and we find a string of retro-vintage shops in Sumner, New Brighton, Richmond and Kaiapoi that produce some of the best pre-loved designer clothing at staggeringly cheap prices. In between shopping sprees, we grab an ice cream and walk along Sumner Beach. Christchurch has mountains, hills, rivers, forests, harbours, lakes and beaches all within minutes drive.

We dined at the Dux De Lux in the Arts Centre. The Dux De Lux is a legendary Christchurch icon with brilliant vegetarian and seafood meals and it’s amazing to think it used to be a thriving university building 40 years ago. We can’t wait to get back to Beaufort House – we’re in the $500 a night Beaufort suite – and soak in a big old hot claw-foot bath, with candles glowing; it’s just so romantic.

Noel shouts us pancakes next morning. It’s his birthday and we have nothing to shout him back.

But he’s in good spirits with phone calls from his family. Noel was an senior driller on offshore oil rigs and mad-yachtie. He worked for 14 years on oil rigs lecturing in blow out prevention: a shame BP didn’t catch up with him three or four months ago!

Sharon tells us about her work at 3ZB Broadcasting and TelstraClear; and her love of ornaments and furniture auctions which has resulted in a massive200 year old oil painting purchase in the reception. In between times her and Noel own and run Tiffanys Restaurant, another historic grand old building on Oxford Terrace.

The next morning Chrissy and I chat for hours with Noel and Sharon about Beaufort, their purchases, yacht trips around the Med and some of their brilliant guests. Christchurch and Beaufort House has been perfect break that expunged winter for a few days.